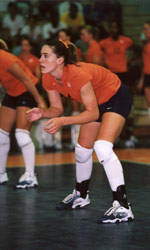 CLEMSON, S.C. – The 2001 Clemson volleyball team was honored at a banquet on Clemson’s campus Wednesday evening. The recipients of each of the following awards were chosen by team vote.

Senior Jodi Steffes, from Elwood, IL, was chosen the team’s Most Valuable Player. The MVP award recognizes the student-athlete who by virtue of her athletic talents made the most visible impact on the team during the season. Selected by her teammates, this honoree’s contributions were deemed the most valuable in achieving the team’s goals.

Steffes was also honored with the 3.0 Passer Award, given annually to the player who earns the highest passing percentage during the entire season. The award is based on the accuracy of the serve receive pass only. Steffes also earned the Best Offensive Player Award, which recognizes the student-athlete who made a significant contribution to the team’s success through her offensive play.

Senior Tami BySura, from Chagrin Falls, OH, was chosen the Best Defensive Player, which is presented to the person who, in the eyes of the team, contributed significantly to the team’s success through her defensive skills.

Freshman Stephanie Haskell, from Simpsonville, SC, was the Tiger Spirit award recipient. This award recognizes the player who made a special contribution to the team throughout the season. Because of her achievements as a student and an athlete, this player symbolizes a standard of excellence to which all other athletes aspire. Always seeking to bring out the best in her teammates, the winner of this award unselfishly devotes herself to reaching the team’s goals and inspiring the team.

Junior Jessi Betcher, a native of Boulder, CO, was the recipient of the Dedication Award, which is designed to recognize the individual athlete who has, through dedication and commitment in the weight room, improved her performance on the court. The athlete chosen is not necessarily the strongest or most muscular athlete, but rather the one who works the hardest in the weight room, in order to make herself a better team player.

Freshman Lori Ashton, from Waldorf, MD, was chosen the team’s Rookie-of-the-Year. The award recognizes the player who, in her first year of competition at Clemson, contributed the most to the success of the team. Selected by her teammates, this player is essential in every aspect of the game. Ashton was honored as a member of the ACC’s All-Freshman team.