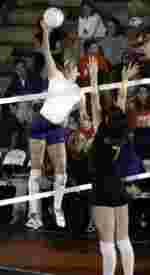 In game one, Wake Forest jumped out to a 9-4 lead, but Clemson whittled away at the lead to knot the score at 17-17 off back-to-back kills by Leslie Finn and Kristin Swanson. The Demon Deacons claimed the next four points (21-17) to build an advantage they would not relinquish. Three Tigers led the team in hitting, as Finn, Ryane Beasley and Lori Ashton tallied four kills apiece. Ashton posted two block solos and Haskell handed out 11 assists with five digs. As a team, Wake Forest held Clemson to a .102 hitting percentage, while the Demon Deacons hit .381. Valerie Rydberg led all hitters with seven kills and five digs, and Christy Williams and Jessica Hauff added five kills each. Erin Borhart dished out 16 assists, and Borhart and Hauff had one block assist each.

Game two was a battle early, as the lead changed hands four times in the first 29 points (15-14). The Tigers’ Ashton gave Clemson the edge with two kills to tie the score at 17 each. Wake Forest closed to within one point (19-20) off a Kim Stern kill before the Tigers claimed six of the next seven points (26-20). Three Tigers recorded kills before a Wake Forest hitting error clinched the game for Clemson. Ashton led Clemson with four kills, while Beasley and Finn recorded five digs each. Haskell handed out 13 assists and Beasley added three blocks (one solo). Rydberg led Wake Forest with four kills and three digs, and Borhart tallied 11 assists. Williams had a team-high three blocks, while Katy de Roeck recorded four digs. Clemson hit .243 as a team, holding Wake Forest to a .111 hitting percentage.

The Demon Deacons edged the Tigers in game three, hitting .310 to Clemson’s .156. The lead changed hands six times, and the score was tied on nine occasions. Clemson built a six-point lead to 21-15, but Wake Forest battled back to level the game at 25-25. The lead see-sawed in the final eight points, and the Demon Deacons tallied three consecutive kills to close out the game and take a two games to one lead. Finn, Beasley and Beckham tallied four kills each, and Beasley had a game-best four blocks (two solo). Laura Jensen posted three digs and Haskell recorded 13 assists. Kim Stern led the Deacons with six kills and a .500 hitting percentage, while Borhart had 17 assists. Sara Beth DeLisle added four kills with six digs and three Wake Forest players posted two blocks each.

In the fourth game, the score remained even until 11-11 when the Demon Deacons won nine of the next 11 points to go up 20-13. Wake Forest held onto that lead, clinching the match with a 30-17 score. As a team, Wake Forest hit .385 to Clemson’s .156. Finn and Beckham tallied six kills each, and Finn had seven digs. Haskell handed out 14 assists and Beasley had one block in the final game. Rydberg led the Demon Deacons with seven kills and a .583 hitting percentage, while Stern had six digs and three blocks. Borhart added 15 assists.

Overall, the Tigers posted a .159 hitting percentage, while Wake Forest hit .292 for the match. Both teams served up three aces, and the Demon Deacons had 12 team blocks to Clemson’s 10. The Tigers tallied 62 digs to the Demon Deacons’ 77 defensive saves. Finn was Clemson’s overall leader with 17 kills and 16 digs, while Beckham added 13 kills. Beasley tallied 11 kills with eight blocks (four solo), and Ashton had 10 kills with two blocks. Haskell handed out 51 assists with 10 digs, and Abbott tallied 12 defensive saves. For the Demon Deacons, Rydberg led all hitters with 21 kills and 14 digs with five blocks, while Williams and Stern added 14 kills each. Schaefer recorded 15 digs, and Williams had a team-best eight blocks. Borhart handed out 56 assists with 10 digs.

The Tiger volleyball team returns to action this weekend, as it plays host to Florida State on Friday night and Duke on Sunday afternoon. The Friday night match is slated for 7:00 PM, while Sunday’s match-up with the Blue Devils will start at 1:00 PM. Admission to all volleyball home matches is free to the public.