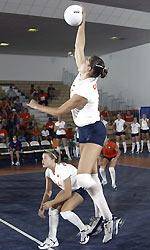 CLEMSON, SC – The Clemson volleyball team improved its 2003 record to 12-6 and 2-1 in the ACC with a 3-1 win over conference foe Virginia. Tonight’s loss was only the second of the season for the Cavaliers, whose record stands at 17-2 overall and 1-2 in league play.

Clemson edged Virginia 39-37 to win game one, then claimed game two by a score of 30-27. The Cavaliers fought back, winning game three 30-27, but the Tigers rebounded to win the final game by a score of 30-17. For the match, Clemson hit .223 while holding Virginia to a .130 hitting percentage. The Tigers tallied 24 blocks (two solo) with 84 digs, while the Cavaliers posted 29 blocks (one solo) with 82 defensive saves. Clemson served up six aces on the night to Virginia’s three service aces.

“I was very impressed with our defense tonight, especially with Lindsey Abbott’s performance,” said Clemson head coach Jolene Jordan Hoover. “I was also pleased with the way the team responded after losing a tough third game. We came back out in the fourth game and handled the challenge.”

Individually, Clemson’s Lindsey Abbott’s tallied 27 defensive saves on the night, and Liz Beckham turned in a double-double with 11 kills and 13 digs.

In the second game, Clemson’s Beasley led the Tigers with a .500 hitting percentage and six kills. She also had two blocks, while Haskell dished out 17 assists with nine digs. Virginia’s Osco led the Cavaliers with six kills, while Ashcraft tallied eight defensive saves. Davis and Boyle posted two blocks each. As a team, Virginia hit .250 to Clemson’s .186 hitting percentage, and the Cavaliers had five team blocks to Clemson’s three.

Ryane Beasley led the Tigers in game three with seven kills, a .636 hitting percentage and a team-best two blocks. Haskell dished out 17 assists with nine defensive saves. Virginia was led by Osco, who tallied six kills with five digs. Branagh posted 10 assists, and Ashcraft had eight digs. The Cavaliers outhit the Tigers in the third game, recording a .250 hitting percentage to Clemson’s .186.

In the final game, Clemson’s Finn led all hitters with nine kills and a .438 hitting percentage, while Beckham picked up six digs. Haskell handed out 16 assists, and four Tigers posted one block each. Boyle led Virginia with four kills, while Ashcraft had six digs. Clemson outhit Virginia as a team, recording a .389 hitting percentage while holding the Cavaliers to .047.

Clemson returns to action on Saturday as the Tigers play host to Maryland. The match is slated to begin at 6:00 PM in Jervey Gym. Admission is free to all Clemson home volleyball matches.