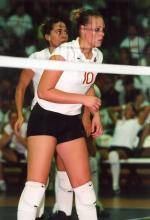 In game two, the Tigers jumped out to an early lead and held on to it to win 30-22. Clemson hit .419 in game two and held the Demon Deacons to a .167 hitting percentage behind Ashton’s six kills and Beasley’s five kills. Leslie Finn led the team in digs with seven and Haskell recorded 18 assists with three digs in game two. Wake Forest was led by Williams and Kim Stern with four kills each. Rydberg posted seven digs and Borhart recorded 11 assists with two aces for the Demon Deacons.

Individually, Clemson was led by Ryane Beasley with 20 kills, a .333 hitting percentage and four blocks (one solo). Ashton added 19 kills with a .436 hitting percentage and a team-best seven blocks (two solo), while Beckham recorded 16 kills with 13 digs and one service ace. Abbott led the Tigers with 23 digs and Stephanie Haskell handed out 63 assists with 16 digs and three blocks.

Rydberg paced Wake Forest with 23 kills and 22 digs, while Williams tallied 17 kills with seven blocks (two solo). DeLisle led the team in digs with 23 and Borhart dished out 63 assists with 11 digs and four blocks.

The Tigers will return to action Saturday at 4:00 p.m. as Clemson will take on the number-two seed Maryland in the semifinals of the 2003 ACC Tournament in Orlando, FL. The Tigers and Terrapins last met in the tournament in 2000.