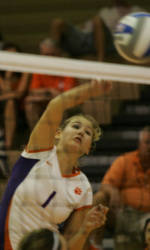 Clemson returns to play Saturday at 6:00 pm in Jervey gym when they take on North Carolina. Fans who show their football ticket stub will be entered in a drawing to win a Best Buy gift card. Admission to the volleyball match is free to all fans.

The Tigers, who entered the match ninth in the nation in blocking with a 2.88 per set average, found themselves with only six after four sets of play. But four blocks, including three from Alexa Rand and Hannah Brenner, in the fifth set helped the Tigers pull away for the win. Clemson improved to 4-2 in five-set matches, with five of those six coming in league play.

Clemson led the match, two sets to none going into intermission, but NC State came out on fire, hitting .414 and .289 in the third and fourth set victories, forcing a deciding fifth set. Clemson controlled the final set, winning 15-7 behind three Serenat Yaz kills.

Sandra Adeleye led the Tigers with 17 kills, while freshman Hannah Brenner recorded career-bests in assists (45), blocks (7), and kills (6), to go along with 10 digs for her fourth double-double of the season and third in a row.

Yaz had 13 kills and 17 digs for her tenth double-double of the season, and her seventh in eight ACC matches. Brooke Kohler had a career-best six kills on 12 swings, and Camila Rosado also matched a personal best with three digs.

NC State blocked Clemson a season-high 15 times, but committed 11 service errors and allowed seven aces in the match. The Pack actually outhit the Tigers, .211-.183, but hit just .040 in the fifth set, while Clemson hit .389 and sided out on seven of eight attempts.

The second set was all Tigers, as they hit .367, with Sandra Adeleye leading the way with four kills in the set. Yaz and Patzin also added three apiece, while registering three blocks and holding NC State to .118 hitting.

It was NC State who came out as the aggressor after intermission, hitting a blistering .414 (13-1-29), while blocking the Tigers six times, negating Adeleye’s six kills. The Tigers hit only .105, as the Pack force a fifth set.

The Tigers came out quickly in the fifth set, taking a 6-1 lead behind Brenner’s three blocks assists, two of which came with Rand. The Tigers stretched the lead to 10-3, and won the match on a service ace from Yaz.