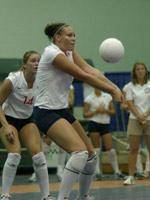 CONWAY, SC – The Clemson volleyball team defeated Coastal Carolina 3-0 (30-20, 30-27, 30-25) on Friday night at Kimbel Arena on the first day of the Coastal Carolina Classic. The Tigers improve to 4-5, while the Chanticleers drop to 3-4 on the season.

The Tigers were led by Ryane Beasley with 16 kills and a .389 hitting percentage. Beasley led the team at the net with seven blocks (two solo). Leslie Finn added 15 kills with a .278 hitting percentage, and Lori Ashton recorded nine kills with two blocks. Carly Hill served up a match-best and season-best five service aces, and Stephanie Haskell handed out 29 assists and two service aces.

The Tigers will face Florida Atlantic tomorrow at 10:00 AM and Wofford at 2:00 PM on the second day of the Coastal Carolina Classic.