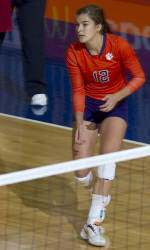 “It’s always nice to beat South Carolina because it’s a great rivalry, and they’re a great team,” said Jolene Jordan Hoover, who won her 383rd match as Clemson’s head coach. “Whenever you can get a win against them, you really appreciate it.”

Sandra Adeleye led the Tigers with 13 kills, including seven in the second set, as the Tigers hit an efficient .287 for the match. Kamryn Sherman had her first career double-double with 20 assists and 11 digs, both career-highs for the freshman setter. Junior hitter Serenat Yazalso added a double-double with 10 kills and 10 digs, her first of the season and 20th of her career.

The Tiger defense was solid overall, holding the Gamecocks to .182 hitting, and registering 63 digs, led by Natalie Patzin’s20, the second-best effort of her career. The Tigers also did not allow an ace in the match, and have given up just one in their last six total sets.

Offensively, the Tigers had just ten attack errors in 122 swings, while converting for 45 kills. Setters Sherman and Hannah Brenner combined for 36 assists, and moved the ball around as six players tallied ten or more attacks. Freshman Kristin Faust added eight of them, and Karis Watson had five. Junior Alexa Randalso added six kills in 14 swings without at error, and had three block assists, giving her 301 for her career.

“I was really pleased with how steady we were,” said Hoover. “South Carolina was digging a lot of balls and there were some long rallies. South Carolina was able to play good defense, but were able to separate with some runs. Kristin Faust had two runs in game one, and were able to score in that rotation. I felt like our middles did really well.”

Clemson earned its second straight 3-0 win over the Gamecocks, with each coming on a neutral floor. South Carolina holds a 34-22 all-time series lead.

The Tigers needed little motivation to get started in this one, and roared out of the gate to take an early 9-4 lead and never trailed in the first set getting behind Adeleye, who had five kills. The Tigers hit .341 as a team, while holding South Carolina to a .190 mark. Six Tigers had two or more kills in the set, and the Tigers were strong defensively, with Patzin leading everyone with seven digs, and Clemson pulled away for a 25-16 set win.

The second set was much tighter, as South Carolina grabbed an 8-6 lead behind Juliette Thevenin, who led all players with 14 kills in the match. Trailing 9-7, Clemson went on a 4-0 run, which the Gamecocks responded to with a 4-0 run of their own. Hoover called a timeout to regroup, and her adjustments paid off, as Clemson went on a 7-2 run to take an 18-15 lead. After Clemson took a 23-19 lead on a Patzin service ace, Thevenin hammered three straight kills to bring the gamecocks within one at 23-22. But Karis Watsonand Rand got in front of Thevenin’s next swing for a block, and Simmons again finished the set with a cross-court kill for the 25-22 win.

The third set was all Tigers early, but the Gamecocks took a 9-8 lead on a Tiger error. Clemson responded with three straight to take the lead which they would not relinquish. The Tigers continually went ot Serenat Yaz, who kept finishing on timely kills, finishing with eight in the set. A Thevenin kill brought the score to 22-18 Tigers, but Clemson went to Yaz and then to Rand before Gamecock setter Taylor Bruns sent an attack outside the antenna to seal the 25-18 set win.