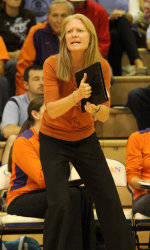 The Clemson volleyball team will play host to Boston College and Maryland in a pair of crucial matches in Jervey gym. The Tigers (11-5, 3-2 ACC) and Eagles (6-10, 2-3 ACC) play on Friday at 7:00 pm, while Clemson and the Terps are slated for a 7:00 pm start on Saturday.

Friday’s match has been designated as Youth Day, and Tiger fans will be able to partake in face painting, sign making, and pictures with the Tiger.

Friday’s match is available on Clemsontigers.com on TigerCast, and both matches will have live stats courtesy of GameTracker.

Saturday’s match was originally scheduled for 6:00 pm, but was moved back to 7:00 pm due to the 3:00 pm football kickoff, also on campus. Both matches are free to attend, and fans are encouraged to stop in as the Tigers trip to create separation in ACC play. Fans will also have a chance to win a flip cam at Saturday’s match.

The Tigers have played three straight five-set matches, and another this Friday would set the new school record. The Tigers defeated NC State, 3-2, on Saturday in a thriller.

Clemson holds a 12-2 all-time mark against the Eagles, and has won seven in a row. Last season, Clemson won, 3-0 in Jervey Gym in the only matchup of the season. This will be the first year since 2008 that the schools will meet twice in a volleyball season.

Clemson and Maryland have played 61 times previously, with the Tigers holding a slim, 34-27, all-time mark, which includes eight straight Tiger victories. Clemson won, 3-1, last season against the Terps, who finished ahead of Clemson at 10-10 in league play. Maryland will play at Georgia Tech on Friday before heading to Tigertown for the Saturday evening match.

The Tigers enter a critical stretch of the ACC season, with just four of the next 12 matches coming at home, including this weekend. Clemson heads to nationally ranked Miami and Florida State next weekend as well.

Clemson features a balanced offense, as five players are currently averaging more than two kills per set, led by Sandra Adeleye, at 3.13 per frame. Serenat Yaz, who has three straight double-doubles and is coming off a career-best 22 kills is next in like, followed by Alexa Rand, Mo Simmons, and Kristin Faust. Rand also leads the ACC in hitting percentage at .400, and is second in blocking at 1.42 per set.

As a team, the Tigers are third in the ACC and 23rd nationally in blocking and second in hitting percentage allowed in the ACC.