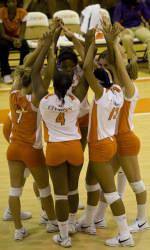 Clemson enters the match as winners of two of the past three matches, with the loss coming in five sets at #17 Florida State. The Tigers picked up their 700th win during the past weekend, the second-most in ACC history. Jolene Jordan Hoover is also closing in on 350 wins at Clemson, needing only two more to reach that milestone.

The Tigers feature several players that rank among the best in the conference. Freshmen Lia Proctor averages 3.65 kills/set, which is second in the ACC, and Kelsey Murphy is third in assists/set at a 10.44 mark. The team’s .263 hitting pct. is 24th nationally.

Clemson leads the all-time series with Boston College 9-2, and won 3-0 in both meetings in 2008. The Tigers have won four straight against the Eagles, who last beat the Tigers in 2006.

This season, the Eagles lost the first match of the season before going on a 10-match winning streak, after winning only eight matches in all of 2008. They the dropped their first four ACC matches, but rebounded for a win against NC State, whom Clemson defeated on Sept. 26. They are lead offensively by Lollie Kolosky, who is averaging 3.40 kills/set on .348 hitting pct. BC has played good defense so far, as they average 2.23 blocks/set and are only allowing opponents to hit at a .178 clip.

The Tigers hold a 31-27 series edge against Maryland in program history, winning both meetings with the Terrapins a season ago to widen that gap.

Maryland has not had a winning streak or losing streak longer than three matches this season so far. They spread their attack out, with five players who have more than 100 kills this season. Libero Sam Rosario is 18th in the nation in service aces/set, and also registers 4.00 digs/set on average. The Terps hold their opponents to a .187 hitting pct., and average more than 2.00 blocks/set.