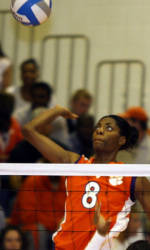 CLEMSON, SC – After clinching a bid to the NCAA Tournament and at least a share of the ACC title last weekend, the Clemson volleyball team moved back into the rankings on Monday at #25. The Tigers boast a 26-3 overall record this season with a 19-1 ledger in conference matches.

The ranking is the second for Clemson this year as the Tigers were listed 24th in the Oct. 29 AVCA poll.

Danielle Hepburn leads the team with 381 kills and 148 total blocks. The junior from Miami, FL is also on pace to set the school record with a .401 hitting percentage. She is one of five Clemson hitters to have notched at least 250 kills on the year, while setter Kelsey Murphy owns an impressive 12.56 assist per game average.

The Tigers will look to claim the ACC title outright this week as they travel to Maryland and Boston College to wrap up their regular season.