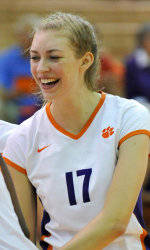 CLEMSON, SC – Clemson volleyball posted 21.0 blocks, the third-highest total in school history, but it wasn’t enough as ACC-favorite Duke defeated Clemson, 3-2, in an ACC showdown. Alexa Rand had a school record 13 block assists as part of her 15 total for Clemson (10-4, 1-2 ACC).

Clemson will go on the road for two straight weekends, as Clemson takes on Virginia Tech and Virginia  on Oct. 1 and Oct. 3 for their next action.

The 1,243 fans at Jervey gym were loud and helped keep the momentum, and posted the fourth home match of more than 1,000 fans on the season.

Clemson struggled offensively, but relied on an historic night blocking-wise to keep them in the match. Alexa Rand’s 15 led the way for the Tigers, as she entered the match in second place in the ACC in blocking. Mo Simmons collected a career-high eight, and was just two blocks and a dig shy of a triple-double. Clemson entered the match ranked fourth nationally in blocking, and averaged more than four per set on Saturday, including seven in the fourth set. The Tigers allowed only two aces defensively as well.

All-ACC player Sandra Adeleye had nine kills, but only took 28 swings. She was able to block five attempts, as Clemson finished one block-assist shy of the school standard.

Duke battled back, taking the second set 25-22 and the third set 25-15. However, Clemson was up for a fifth set with the league favorites, taking the fourth set, 26-24. Clemson jumped out to a 5-0 lead in the fifth set, but Duke rallied for a fifth-set 15-11 win for the second straight night.