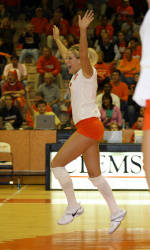 Clemson Volleyball Rallies For 3-2 Win At Virginia On Saturday

The Tigers put forth a total team effort with several players contributing to the outcome. Freshman Brittany Fennell recorded a career-high 10 kills and 10 block assists, while Cansu Ozdemir stepped in and recorded the first six kills of her career to go along with eight assists, 16 digs and three block assists. All-ACC performer Danielle Hepburn tallied 17 kills and five blocks. Kelsey Murphy added 52 assists, 19 digs, six blocks, and five kills on the night.

Kendahl Voelker and Shannon Davis led the Cavaliers with 17 kills apiece, while Lauren Dickson added 15 kills in the effort.

In the deciding fifth set, Clemson jumped out to a 6-2 lead behind three consecutive kills form Abbott. Following a timeout, the Cavaliers answered with four points to knot the score at six-apiece, as part of a 12-6 run that put Virginia ahead, 14-12. At match point for the Cavaliers, Abbott again tallied three consecutive kills to put the Tigers on top at 15-14. After a Virginia Sydney Hill kill tied the score at 15-15, Hill sent her serve long, giving the tigers a 16-15 edge. Lia Proctor was able to get above the Virginia defense for the game-winning kills, which was tipped by the Cavalier defender.

The Tigers got on the big board in set three, jumping out to a 5-2 lead, and then stretching the lead to 18-10. The Cavaliers pulled to within 18-14, before the Tigers went on a 7-1 run to close out the set at 25-15. Jeannette Abbott notched three kills in that critical stretch. The Cavaliers had only nine kills against eleven errors for a negative .051 hitting percentage.

Clemson will return to action next weekend as conference foes Miami and Florida State will make the trip to Jervey Gym. The Tigers and Hurricanes will meet on Friday while Clemson will take on the Seminoles on Saturday.