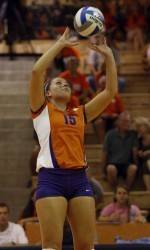 Hannah Brenner led Clemson to a above-.300 hitting percentage for the second consecutive match, as she dished out 39 assists in the three sets, finding five different players for seven or more kills.

Sandra Adeleye had 10 kills to lead the Tigers, while Alexa Rand posted nine blocks (2BS-7BA) to up her average to 1.58 per set, which ranks in the top ten nationally. She also had seven kills in ten attempts.

Clemson was solid defensively, holding BC to .100 hitting. Cansu Ozdemir had a three-set career high of 20 digs. Clemson had 12.0 blocks as a team, just above their 2.93 per set average coming into the match, which ranks 8th nationally. Brenner added five block assists, and six different Tigers had at least one. freshman Camila Rosado had seven digs, one shy of a career-high.

Serenat Yaz had nine kills and eight digs, failing to record a double-double for the first time in nine matches. It was Clemson’s first 3-0 win over an ACC opponent in 2010, and upped Clemson’s record to 12-2 against BC all-time.

The Tigers will return to action this weekend as they travel to Duke on Friday at 7:00 pm and Wake Forest on Saturday at 6:00 pm.