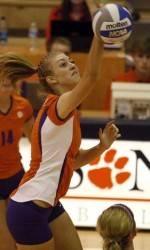 ROCK HILL, SC – The Clemson volleyball team defeated the University of South Carolina Gamecocks, 3-0 (26-24, 25-22, 25-19), in the first match of the Carolina Classic held at Winthrop University in Rock Hill, SC on Friday night. The Tigers (4-0) snapped a three-match winning streak by the Gamecocks (0-4).

Clemson will play host Winthrop on Saturday at 10:00 am and College of Charleston at 5:30 pm later in the evening.

Preseason All-ACC selection Sandra Adeleye led all players with 12 kills, including seven in the second set. Serenat Yaz had eight kills, including the match clincher, and a career-high 17 digs. The Tigers have yet to drop a set in the 2010 season, as they swept all three opponents in last week’s Big Orange Bash.

Clemson’s defense has been the strong point so far, as the Tigers lead the ACC in blocking and rank second in opponent hitting percentage.

Clemson posted a late comeback in the first set, rattling off three straight points on Mo Simmons’ serve to win 26-24 as a Teresa Stenlund attack sailed just wide. The Tigers held the Gamecocks to a .082 hitting percentage, using size to bother Carolina. The Tigers had three blocks in the sets’ first nine points, and led by a 16-13 margin halfway through the set. Clemson looked to have the set put away at 23-20 before South Carolina stormed back with four straight to take a 24-23 lead. Hayes then set up Adeleye after a long rally to tie the match up before Simmons gave Clemson the 25-24 lead with an ace.

The Tigers took a 2-0 match lead with another close, 25-22 set. Clemson hit .243 while holding the Gamecocks to a .143 mark, using four more blocks as help. With South Carolina up 7-5, Clemosn went on a 7-point run to take a 12-7 lead. The Gamecocks scored five straight right back to knot the score before Clemson took the lead for good with three straight kills from Adeleye to take a 16-12 lead. A Rand and Patzin block gave Clemson a 23-18 lead, and a Patzin attack hit two Carolina blockers and went wide, clinching the set, 25-22.

In the third set, Clemson held South Carolina to only eight kills and eight errors for a .000 hitting percentage. Serenat Yaz had four kills in the set to lead all Tigers. Clemson opened with an 8-4 lead and never looked back, stretching the lead ot as many as eight at 18-10 and 19-11. The Gamecocks couldn’t put together a streak of more than two points in the whole set, as Serenat Yaz found an opening in the defense to put the match away, 25-19.