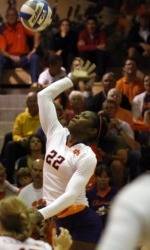 Both matches are available on TigerCast, and will have live scoring at ClemsonTigers.com. Friday’s match will be the Solid Orange match, while Saturday is Scout Night, where all boy and girl scouts will receive a Clemson Volleyball patch. Saturday’s match with NC State was originally scheduled for a 6:00 pm start, but was moved up to 4:00 pm.

Clemson is coming off what is believed to be the second-longest fifth set in NCAA history, a 25-23 decision that went in favor of the league-favorite Blue Devils on Saturday. The Tigers also defeated Wake Forest in Winston-Salem on Friday, and have the opportunity to make a statement against the Tar Heels and Wolfpack.

Friday’s matchup will be an interesting meeting between the ACC’s winningest all-time coaches. North Carolina head coach Joe Sagula’s 211 ACC wins are the only total higher than Jolene Hoover’s 187 career league victories. Clemson and North Carolina have played similarly difficult schedules, with each playing at Florida. The Tar Heels started off ACC play with 3-0 wins at Maryland and Boston College.

NC State enters having dropped their ACC tilt at Maryland on Saturday, snapping their 13-match winning streak. Clemson holds a 37-17 all-time record against the Wolfpack. The Tigers won both matchups a season ago, a 3-1 win in Raleigh, and a 3-2 decision in Clemson.

The Tigers enter the weekend as winners of six of the last seven matches. Clemson’s two middles, Alexa Rand and Sandra Adeleyehave been the offensive leaders so far. Adeleye ranks fourth in the ACC with a 3.36 kills per set average, and is hitting .402, which ranks second in the ACC. Rand holds the distinction of the top spot, as her .410 mark paces the league. She is averaging a career-best 2.32 kills per set, and also ranks third in the league at 1.32 blocks per set. Adeleye ranks 10th with a 1.02 per set average.

In her most recent match at Duke, Rand posted her first career double-double with 15 kills and 10 blocks, which also moved her into 10th on Clemson’s all-time list in career block assists. Junior Serenat Yaz also played a strong match in Durham, recording season highs with 16 kills and 20 digs. Natalie Patzin had a career-high 29 digs from the libero spot, and Mo Simmonsset a new career high with 14 kills and tied a personal best with eight blocks.

The Tigers rank second in the ACC in hitting percentage allowed, as opponents are hitting just .161 against the Tigers, who are averaging 2.59 blocks per set as well.