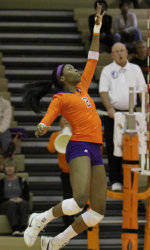 CLEMSON, SC – Clemson head coach Jolene Jordan Hoover has announced the spring portion of the 2012 exhibition schedule on Monday. The Tigers open up spring practice on Monday afternoon in Jervey Gym in preparation for a four-match exhibition schedule, which begins on March 28. Three of the matches will take place on the road, with Clemson taking on Furman in Greenville at 6:30 pm. Clemson will then play Georgia in Jervey Gym at 6:00 pm on April 4, before traveling to road matches at South Carolina on April 11 and Georgia Southern on April 14. The spring schedule does not count toward official NCAA statistics or results, but does allow the team a measuring stick against intercollegiate competition during spring practice. Clemson finished the 2011 season at 20-11 overall and 12-8 in ACC play, and will lose just one senior off of that team. The Tigers return three-time All-ACC honoree Sandra Adeleye, as well as first-time selections Alexa Rand and Serenat Yaz, all of whom will be seniors in 2012. Also back is senior libero Natalie Patzin, rising junior Mo Simmons, and setters Kamryn Sherman and Hannah Brenner. The Tigers finished the season ranked 54th in the RPI, just missing out on an at-large NCAA Tournament bid. 2012 Spring Volleyball Dates: