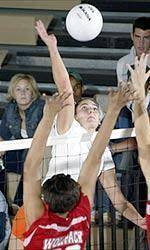 “It was nice to finally play,” said Hoover. “The team was ready to see someone other than each other on the other side of the net. I felt like we played very well defensively, especially Leslie Finn. She had a great night. Stephanie Haskell and Courtney Lawrence did a nice job distributing the ball tonight.”

The Tigers were led by senior Leslie Finn, who tallied 19 kills and one error in 25 attempts to post a career-best .720 hitting percentage. Most notably, Finn had seven kills in seven attempts in the final game, to capture six of the final 10 points. Freshman Brittany Ross added 14 kills, and Lori Ashton chipped in nine kills with a team-high three service aces. Ashton, Finn and freshman Courtney Lawrence led the team in blocks with three each, while Ross and Meghan Steiner added two blocks apeice. Lawrence had a team-best 26 assists in her first appearance in a Tiger uniform, while senior Stephanie Haskell handed out 17 assists. Sophomore newcomer Anna Vallinch led the team in defensive saves with eight, while Haskell added six digs. As a team, Clemson hit .375 while holding Western Carolina to a -.032 hitting percentage. Clemson also dominated at the net, tallying nine team blocks to the Catamounts’ two team blocks.

In game one, Ashton led the Tigers with five kills while Finn and Ross added four each. Haskell and Lawrence tallied seven assists each, and Finn had two blocks for the game. The game was close until the Tigers took a 13-8 lead, then built the margin to seven points (17-10) off a block by Ashton and Finn. The Catamounts could get no closer than five points at 20-15 before the Tigers won 10 of the next 13 points including four straight to close out the game.

Game two began with the teams battling for an edge, until Ashton recorded a kill to give the Tigers the 17-16 advantage. Clemson rolled off five more points for a 22-16 lead, then scored the final six points of the game to win 30-18.

It was all Clemson in game three, as the Tigers jumped out to an 8-1 lead. Western Carolina fought back to bring the margin to four points at 16-12. Clemson responded with a 14-1 point run, sparked by six kills from Finn.

Clemson will return to action on Friday, as the Tigers play host to the 2004 Clemson Invitational. The Tigers will face Western Carolina in a 2:00 PM rematch, then take on nationally-ranked Northern Iowa at 8:00 PM. The tournament continues on Saturday, as Clemson takes to the court at 9:00 AM with a match against The Citadel, then returns to the court at 1:00 PM to take on Winthrop.