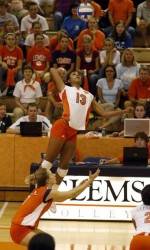 CLEMSON, SC – Clemson Volleyball (9-3, 0-1 ACC) will open its regular season ACC play this weekend in Tigertown, playing host to North Carolina at 7:00 pm on Friday and NC State on Sunday at 1:00 p.m. in Jervey Gym. Friday’s match will be broadcast live via the Internet on TigerCast.

Friday night will also be Dad/Daughter Date Night, in which those on their date will be able to participate in special activities during the intermission between the second and third sets and have their picture taken with the Tiger.

Clemson enters the match having gone 2-1 in the Clemson Classic last weekend, defeating Presbyterian College (3-0) and Furman (3-2) and losing in a five-set nail-biter to #17 Michigan State. The Tigers are one of the top defensive teams in the nation, currently third in the country in blocking and tops in the ACC in hitting percentage allowed.

The Tigers also feature several top players. Senior Lia Proctor is tops in the ACC in kills/set at 3.70, while freshman Alexa Rand is throwing her name firmly into the Rookie-of-the-Year race. She is third nationally in blocks/set and ranks fourth in the ACC in hitting pct. at .368. Freshman Natalie Patzin has also been outstanding, and she enters with a 3.04 kills/set average.

Didem Ege is now seventh in ACC history in defensive saves, having recorded 1,907 so far in her career, and Kelsey Murphy moved into second on Clemson’s all-time list in assists, having notched more than 4,300 in her stellar career.

North Carolina is 4-7 overall, and stumble in on a four-match losing streak. Three of their seven losses have been to nationally ranked opponents, including Michigan State, a common opponent. The Tar Heels use several different lineups, and use 13 players regularly. The Tar Heels won the most recent meeting in 2008, when they defeated Clemson in front of 13,797 fans, still the second-highest crowd for a regular season match in NCAA history. The Tar Heels and Tigers represent each of the past two ACC Champions. North Carolina was picked ahead of Clemson in the preseason poll as well.

NC State enters the weekend at 7-8. They will play at Georgia Tech on Friday night before visiting the Tigers on Sunday. Clemson has won 22 in a row over the Wolfpack, who have lost six of their past eight. A common opponent, DePaul, defeat NC State on Sept. 11, only six days after the Tigers beat the Blue Demons 3-0. The Wolfpack average more than 2.00 blocks/set and have a 1.21 aces/set mark as well.

The Tigers conclude their five-match homestand on Sunday and will play Florida State and Miami on the road next weekend.