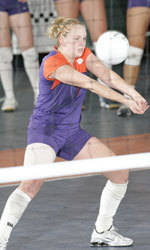 CLEMSON, SC – The Clemson volleyball team will have their first taste of conference action this week as they welcome Wake Forest and Duke to town. The Tigers (5-3) will face the 7-2 Demon Deacons at 7:00 PM on Thursday, Sept. 22, and Clemson will meet the Blue Devils (6-2) on Friday, Sept. 23 at 7:00 PM as well.

Freshman Jeannette Abbott and sophomore Brittany Ross have combined for 213 kills to lead the Tigers this season, while libero Anna Vallinch has tallied 128 defensives saves. Leading Clemson at the net are two rookies, as true freshman Danielle Hepburn has posted 25 total blocks and red-shirt freshman Laura Boozer has contributed 24.

Clemson leads the all-time score over Wake Forest, 17-9, and the two schools split the 2004 contests, with each winning on the other’s home court. Overall, the series is tied at six wins apiece in matches played in Clemson. Thursday’s contest will mark the first meeting between Clemson Head Coach Jolene Jodan Hoover and former player and first-year head coach Heather Kahl. Kahl was a member of the Tiger team from 1991-94, earning AVCA All-Region and second-team All-ACC honors in her final season at Clemson.

The Wake Forest Demon Deacons bring a six-match winning streak into town for Thursday’s match. The team has won two consecutive weekend tournaments, the UTA Invitational and the Demon Deacon Invitational, to improve its record to 7-2. Wake Forest, currently ranked #2 in the ACC, is led by hitters Christy Williams and Lauren Peterson, who have combined for 175 kills and 49 blocks. Setter Erin Borhart has a team-high 101 defensive saves to go along with her 297 set assists.

Duke holds a 27-16 advantage over the Tigers in the series score, including a 10-7 mark in contests on Clemson’s home court. Each school claimed one victory during the 2004 season. Clemson defeated Duke, 3-1, in Durham, NC, while the Blue Devils won the contest in Clemson, 3-1.

The Blue Devils are ranked third in the conference with a 6-2 overall record. They posted a 1-1 record in the Buckeye Classic last weekend in Columbus, OH, falling to now-ranked #22 Brigham Young in five games. Duke setter Ali Hausfeld leads the ACC with a 12.71 assists per game average and the team ranks #1 in the conference for digs per game with an 18.29 mark. Outside hitter Carrie DeMange, a two-time 2005 ACC Player-of-the-Week honoree, has tallied 150 kills and 45 total blocks for the Blue Devils, both team-highs.

Fans may also follow Thursday’s and Friday’s action on the Internet, as livestats will be available for both matches on www.clemsontigers.com.