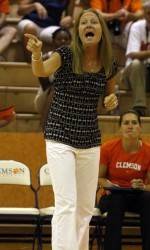 CLEMSON, SC – The Clemson volleyball team opens the 2011 season on Friday at 7:00 pm as they play host to Loyola University Maryland in Jervey Gymnasium. The match is part of the 21st annual Big Orange Bash, which includes Clemson, Tennessee State, Loyola and South Carolina State. Admission to all matches during the weekend are free.

Tennessee State and SC State get the round-robin tournament underway on Friday at 4:30 pm before Clemson takes on Loyola in the nightcap.

On Saturday, the Tigers take on Tennessee State at noon and South Carolina State at 6:00 pm. In other action, Loyola and SC State will play at 10:00 am, and TSU and Loyola play at 4:00 pm.

Each of Clemson’s three matches will be broadcast live on TigerCast on Clemsontigers.com, which will supplement the Gametracker Live Scoring system. Fans can also get live match updates and insight from the site by following @ClemsonVB on twitter.

Friday night will be Fan Appreciation Night in Jervey, and the first 250 fans in attendance will receive a Clemson Volleyball towel.

Clemson holds a combine 4-0 record against the three teams, having never met Loyola, holding a 1-0 edge over Tennessee State, and a 3-0 mark over SC state. Clemson and SC State have not met since the 1989 season, and the match against Tennessee State was in 2002.