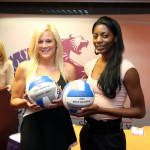 CLEMSON, SC – The 2008 Clemson volleyball team was honored on Wednesday night at its annual postseason banquet. Head Coach Jolene Jordan Hoover and her staff presented individual awards to members of the team at the President’s Box at Memorial Stadium. Danielle Hepburn took home three team honors, in addition to being recognized for her outstanding achievements during the season, and was named co-Most Valuable Player with fellow senior Jeannette Abbott.

The Bernard Caffrey MVP award was the third straight for Hepburn, who was named the 2008 ACC Player-of-the-Year and a third-team All-American. The native of Miami, FL led Clemson with 472 kills and 182 total blocks and also hit at a team-high .391 clip. Abbott, a four-year starter on the outside, posted 373 kills in 2008 with 268 defensive saves. Both Abbott and Hepburn started all 33 matches and played in all 121 sets.

Hepburn was also voted by her teammates as the Tigers’ Best Offensive Player, which recognizes the student-athlete who made a significant contribution to the team’s success through her offensive play. Strength and Conditioning Coach Dennis Love also presented Hepburn with National Strength & Conditioning Association All-American Award, which recognizes collegiate athletes whose athletic accomplishments, in the opinion of the strength coach, reflect their dedication to strength training and conditioning. These athletes are also recognized for their academic and personal accomplishments as well as their integrity as student athletes. It is the second straight year a volleyball player has earned the honor, which is given to just one male and one female student-athlete per school. Meghan Steiner was selected in 2007.

Abbott was also honored for her work ethic in the weight room as the team voted to give her the Dedication Award, which is designed to honor the individual athlete who has, through dedication and commitment in the weight room, improved her performance on the court. Meanwhile, the spirit award is given to the player who seeks to bring out the best in her teammates and unselfishly devotes herself to reaching the team’s goals while inspiring others.

Junior libero Didem Ege also collected a pair of awards on Wednesday night. She earned her second straight 3.0 Passer Award, given to the player who has the highest passing percentage during the entire season. The award is based on the accuracy of the serve receive pass only. Ege, who hails from Istanbul, Turkey, was also named the team’s Best Defensive Player, the third straight year she has been selected for the honor. Ege led the team with 537 digs in 2008 and is the program’s career leader for the statistic

Brittany Fennell was named the Lucia White Memorial Rookie-of-the-Year. Fennell started 21 of 25 matches in which she played as a middle hitter in 2008, missing seven due to an illness. She totaled 111 kills with 83 total blocks while hitting .253 for the year.

Fellow freshman Morgann Mitchell was honored with the Tiger Spirit Award, which was presented by announcer Lance Edwards. The award recognizes the player who made a special contribution to the team throughout the season. Because of her achievements as a student and an athlete, she symbolizes as standard of excellence to which we all aspire. Always seeking to bring out the best in her teammates, she unselfishly devotes herself to reaching the team’s goals and inspiring us all. Mitchell, a walk-on from Peachtree City, GA, played in 21 sets and primarily entered the match for her serving and passing abilities.

Lisa Jedlicka, a red-shirt freshman from nearby Greenville, SC, was given the team’s Practice Player Award.