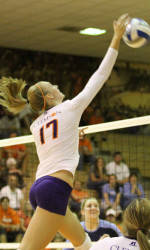 The Tigers will play the first two of eight of the next ten during a key ACC stretch. It will be the first time the Tigers have played consecutive matches against ranked opponents since the 2002 season.

Clemson split matches during the 2010 season with Florida State, but dropped both matches against Miami. The Seminoles enter as the top team in the ACC so far, with an unblemished 7-0 mark.

Clemson holds a 15-10 all-time mark against the Hurricanes, but the Noles have a 25-20 edge over the Tigers.

Clemson has played five set matches in four of their last five outings, going 2-2 in those matches. The Tigers have won three straight matches overall, and are coming off a weekend sweep of Boston College and Maryland in Clemson. The Tigers put up 72 kills against the Terps, which was the most for a Clemson team in the 25-point format, and the most overall since 2007. The Tigers have won nine of 11 overall.

Sandra Adeleye leads Clemson offensively at 3.17 kills per set, and Serenat Yaz, who is also averaging more than three kills per set in ACC play. Junior Alexa Rand leads the league in hitting at .387, and is second in the ACC and seventh nationally in blocking at 1.51 per set.

The Tigers rank 15th nationally at 2.75 blocks per set, while ranking second in the ACC in opponent hitting percentage.

After the Florida showdowns, Clemson goes back on the road next weekend to Virginia and Virginia Tech, before returning home on Oct. 28 for the Dig Pink match against Duke.

October is National Breast Cancer Awareness Month, and Clemson Volleyball is doing its part to help raise money and awareness by hosting their annual “Dig Pink” Match, which is sponsored by The Graphic Cow. The match will take place on Friday, October 28 at 7:00 PM when they take on defending ACC Champion Duke in Jervey Gym.