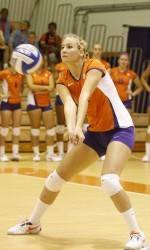 Florida State holds a 24-19 series lead over the Tigers, and come in to the match after a weekend split with North Carolina and NC State. The Seminoles defeated the Tigers in both matchups in 2009, a season in which they advanced to the NCAA Elite Eight, and were ranked among the top-15 for much of the year.

Miami is also 2-3 in the ACC entering the weekend after losses to NC State and North Carolina last weekend. The Hurricanes are 12-4 overall. Clemson has a 10-3 all-time advantage over the Hurricanes, including a come-back win in Coral Gables last year, despite Lane Carico’s school-record 36 kills.

The Tigers will have an opportunity to move up in the RPI, as Florida State is ranked 14th and Miami is 24th. Clemson is on the NCAA bubble at 69th.

The Tigers enter the weekend ranked seventh nationally and tops in the ACC with a 2.97 blocks per set average. Offensively, Sandra Adeleye is averaging more than three kills per set, while Serenat Yaz is averaging 2.90 kills per set, and has posted six double-doubles on the season.

After the matchups in Florida, the Tigers will head home for eight of the next ten matches. Clemson hosts NC State and North Carolina on Oct. 15 and 16, respectively, in Jervey Gymnasium.