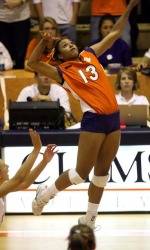 Hepburn improved her league-leading kills per set average with her second straight 21-kill performance. Abbott had 14 kills and 10 defensive saves for the Tiger effort, while Proctor tallied a career-high 19 digs to go along with her 12 kills.

Florida State’s Lauren Richardson led all hitters with 22 kills, including a pair for critical points that gave the Seminoles the lead in the fifth set.

She posted back-to-back kills to put Florida State on top 14-12 while a kill by Stephanie Neville clinched the victory. The Seminoles held the early lead in the final set at 7-4, but Clemson pulled ahead with five straight points on Didem Ege’s serve. The teams traded points with a Hepburn kill giving the Tigers a 12-11 advantage. However, it was the last point of the night for Clemson and culminated the come-back win for Florida State.

The Tigers had won the first and second sets for the 2-0 cushion in the match, but the Seminoles rallied back in the third game to down Clemson by a 25-16 margin.

Set one was a hard-fought affair that saw the Tigers utilize a late three-point run to secure the win. With the set knotted at 21, Clemson scored three straight points with two on kills by Hepburn and Proctor. Florida State avoided set point with a kill by Rachael Morgan, but Hepburn sealed the 25-22 win.

In the second set, the Tigers jumped out to the early lead and extended the margin to 21-14. They then withstood a late effort by the Seminoles to claim the 25-18 win.

Florida State then recorded seven block assists to hold Clemson to a .143 hitting percentage in set three. The Seminoles also avoided the tough Tiger defense, which ranked fifth nationally with a 2.88 blocks per set average entering the match but did not record a single block in the frame.

Clemson appeared to have a chance to close out the match in the fourth set as the Tigers held a 20-18 edge. However, Nikki Baker served straight points to swing the momentum Florida State’s way. The Seminoles then held on, 25-23, to force the deciding fifth set.

The Lady Tigers will return to action on Sunday as they travel to Coral Gables, FL for a date against the Hurricanes. Match time is slated for 1:00 pm.