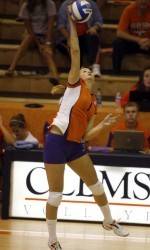 The Tigers will return home this weekend as they play host to Miami and Florida State in Jervey Gymnasium.

Serenat Yaz tied a career high with 20 kills, and also registered 19 digs both match highs. It was her 14th double-double of the season, and her 11th in 13 ACC matches, and 13 of her kills came in the final two sets.

Cansu Ozdemir tied for the match high with 19 digs.

Wake Forest took the first set, 25-20, after holding on to a one-point edge and siding out on 15 of 20 opportunities. The Deacs hit .344 in the set compared to Clemson’s .162 mark. Andrea Beck and Adeleye each had five kills to lead all players.

Clemson bounced back out of the intermission, and all but dominated the third set, leading by as many as 11 at 23-11 on the way to a 25-18 set win. Yaz had a team-high six kills and six digs, as the Tigers turned an 8-7 lead into a commanding, 21-11 advantage, which included a pair of Brenner aces.

In the fourth set, the Tigers looked to be in control early, running out to a 7-1 advantage. A 9-1 Wake run flipped the momentum, as Wake took a 10-8 lead. However, a Hoover timeout sent the Tigers on a 12-5 run behind a trio of Patzin kills and a pair from Yaz. Wake stormed back to pull within one at 21-20, before the Tigers took a 24-21 lead with the serve. But Wake was up to the challenge, fighting off three straight match points, and scoring five straight to win, 26-24.