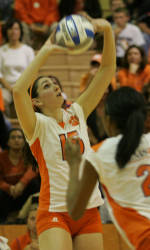 CLEMSON, S.C. – Lia Proctor each accounted for a  team-high 15 kills for Clemson, but it was not enough as the Lady Tigers dropped a 3-2 match to Georgia Tech. Set scores were 23-25, 25-17, 22-25, 25-13, 7-15. The Yellow Jackets took the season series form the Tigers, winning both matches in five sets.  Clemson (23-9, 13-7) forced the fifth set with a tremendous fourth-set victory, but recorded an attack percentage of .000 (three kills, three errors) in the fifth set while Georgia Tech (21-9, 15-5) managed an attack percentage of .550 (12 kills, one error) in the deciding fifth set.  For the game, Clemson tallied a .222 attack percentage with 54 kills and 18 errors while the Yellow Jackets posted a .203 percentage with 71 kills and 34 errors.  Kelsey Murphy dished out a team-best 44 assists while a trio of student-athletes reached double figures in digs. Proctor notched a double-double with a team-high 19 digs. Didem Edge, playing in her last home match, also totaled a team-best 19 digs. The ACC’s career digs leader has 2,291 in her storied career. Alexa Rand amassed a match-high seven blocks, six of which were assisted. Adeleye had six blocks as did Murphy.

After dropping a hard-fought first set, the Lady Tigers rebounded for a resounding 25-17 victory in the set period. The teams traded the first 22 points of the set as the score was tied at 11 apiece.  A service error by the Yellow Jackets gave Clemson a 12-11 lead. Rand then took a pass from Jolene Jordan Hoover’s team took control. The squad went on a 7-0 run thanks in part to solid all-around play. Adeleye started things off with a kill from Murphy. An ace by Cansu Ozdemir forced the Yellow Jackets to call a time-out. Georgia Tech committed two errors on the next three plays and Adeleye again found the court for a kill, putting the score at 20-15. Adeleye and Serenat Yaz each recorded a kill for 22-15 advantage.   In the third set, the visitors broke a 14-14 tie with a 3-0 run. The Lady Tigers pulled within one, but the Yellow Jackets embarked on another mini-run, taking a 20-17 lead. Clemson pulled within one on a couple of occasions, but was unable to tie the score as the Yellow Jackets scored five of the last seven points for the 25-22 victory.  The Lady Tigers forced a fifth set with a dominating 25-13 win in set four. With the score tied at eight apiece, Ozdemir dropped back to serve, helping Clemson score the next three points. After the Yellow Jackets scored a point, Clemson earned it back with a kill from Adeleye.

Yaz then served six straight points, breaking the set open as the Lady Tigers held a 16-9 lead. The margin widened to 12 on Proctor’s kill, easily helping the home squad record a 25-13 victory.

In the crucial fifth set, the Yellow Jackets jumped out to a 4-2 advantage, forcing a time-out by Clemson. The Lady Tigers responded with another point, but the visitors again scored to take a two-point lead. Georgia Tech held a 10-5 lead after two Clemson miscues. The Lady Tigers were unable to get back into the set, falling 15-7.

The match marked the last home one for Clemson seniors Lia Proctor and Jessica Williams.

The NCAA Volleyball selection Show will be aired on Sunday at 3:00 pm on ESPNews.