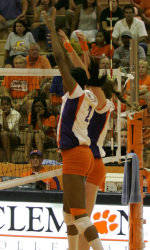 Clemson finished the match with 11.0 blocks overall, and were led by Alexa Rand and(4 BS, 2 BA) and Sandra Adeleye (1 BS, 3 BA) in the match. Adeleye added a team-high 16 kills in 35 attacks, and sophomore Natalie Patzin added 12 kills and eight digs.

This was the fifth straight match between the two teams to go to five sets, with Georgia Tech winning each of the last three, including spoiling Clemson’s senior night a season ago.

Head coach Jolene Jordan Hoover played a tight lineup, using only eight players in the match: six sophomores, one freshman, and a senior.

Rand and Adeleye, both preseason All-ACC selections, combined for 24 kills, a .333 hitting percentage, and 10 total blocks. Rand even added a career-high five digs. Patzin’s 12 kills continued her hot streak, as she was named to the Spartan Invitational All-Tournament team last weekend for her strong play. Lacy Hayes had a career-high 42 assists, and added eight digs.

The Tigers took advantage of 15 Georgia Tech service errors and had seven aces of their own and ended up plus-15 off service points.

The Tigers played solid back row defense, getting 19 digs from libero Cansu Ozdemir and 16 from Serenat Yaz to help keep Tech’s big hitter at bay. Sophomore All-ACC candidate Monique Mead had 20 kills to lead all players, but also ended with 11 attack errors and four service errors, including a crucial serve into the net at 13-12 Tech in the fifth set.

Georgia Tech took a 1-0 led in the match with a 25-21 lead. The Jackets got a small, four-point working margin early in the set, and were able to hold off the Tigers down the stretch. Monique Mead had five kills, but also had five attack errors in the set. Sandra Adeleye led the Tigers with five kills, while Natalie Patzin added three.

The Tigers rebounded in the second set, jumping out to a 15-6 advantage and holding a lead for the 25-16 win. Clemson hit .270 while holding the Jackets to .133 hitting.

The third set was all Tech, as the Jackets came out and hit .406. Mead had five kills and Jennifer Percy added four, as Clemson struggled to regain serve. Tech took the set, 25-16 and the 2-1 match lead.

Clemson was not ready to lay down, however, as the Tigers again built a commanding lead, moving ahead by as many as 10 points at 21-11. The Tigers hit .304 and went repeatedly to Adeleye, finding her for five kills in six attempts.

The fifth set was nothing short of thrilling, with neither team grabbing more than a two point lead. It looked as if Tech might pull away with leads of 7-5, 9-7, and 12-10 on the Tigers. But each time, Clemson clawed back. Cansu Ozdemir service for the Tigers.

A 14-volley point ensued, with the crowd getting more captivated by every spectacular dig. Finally, Rand and Lacy Hayes got in front of a Percy attack, bringing a huge roar form the Jervey crowd. With match point, Ozdemir put it over the net, and Tech went to their go-to player Mead, who hit directly into Rand, clinching the final point of the match.