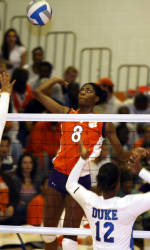 ROCK HILL, SC – The Clemson volleyball team opened its 2008 spring schedule on Wednesday night with a victory over Winthrop in Rock Hill, SC. The Tigers won all four games, which have been changed to a 25-point format for NCAA competition.

Clemson downed the Eagles, 25-15, in the first game as junior Danielle Hepburn tallied five of her 18 kills in the frame. Jeannette Abbott then led the offense with four kills in a 25-21 game two victory, while the Tigers recorded 14 kills in the third game (25-16). Hepburn then posted seven kills in leading Clemson to a 25-21 win in game four.

The Tigers will return to action on Apr. 12 as they will play host to Middle Tennessee State and the College of Charleston in an all-day tournament.