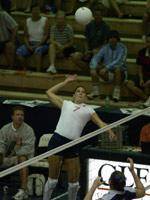 CLEMSON, S.C. – The Clemson volleyball team downed Winthrop by a score of 3-1 in Friday’s nightcap at the Big Orange Bash. The Tigers picked up their second win of the season after Texas Tech defeated the College of Charleston in the second match of the afternoon. With the win, Clemson improves to 2-4 on the season, while Winthrop falls to 3-1.

In game two, the Tigers rebounded from a slow start to edge the Eagles, 31-29. Clemson’s Finn hit .400 with seven kills, while Winthrop’s Mary Hock tallied five for the Eagles. Winthrop still outhit the Tigers .178 to .162.

The Tigers jumped out to a 10-5 lead in game three, controlling the tempo of the game. Clemson hit .312 to Winthrop’s .054 and served up three aces. Finn again led the Tigers with five kills, and Hock and Tori Grafeman added three kills each for the Eagles.

Overall, Clemson hit .195 for the match behind Finn’s 20 kills. Ryane Beasley and Liz Beckham added 12 kills each, and Beckham also tallied a team-best 17 digs. Beasley led the Tigers at the net with four blocks, and Laura Jensen handed out 25 assists while Dawn Robertson added 23 assists.

Winthrop posted a .165 hitting percentage for the match and was paced by Mary Hock’s 15 kills and 11 digs. Tori Grafeman added 14 kills, and Taryn Surbaugh knocked down 13 kills with a .455 hitting percentage. Emily Heckl passed out 48 assists, while Sarah Billingsley tallied 20 digs. Surbaugh also recorded a team and match-best seven blocks (one solo).

Sara Davis led the College of Charleston with 14 kills and 11 digs, while Rebecca Wieters and Marie Dobrenz tallied 10 kills each. Dobrenz and Stephanie Ballard recorded 19 digs each, while Kaycie Carr had 45 assists with 11 digs. Alisa Long posted a team-best six blocks, and Dobrenz and Carr served up two aces each.