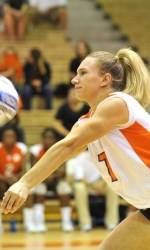 Proctor, who entered the match as the ACC’s leader in kills/set was able to find the floor on 13 of her 36 attempts, and also register eight digs and three blocks. Natalie Patzin had nine kills for Clemson, who upped their win streak against NC State to 23 in a row.

Freshman Alexa Rand had seven total blocks, giving her 80 on the season so far. She entered the weekend third in the nation in blocking. She also had six kills on the afternoon.

Kelsey Murphy had an outstanding weekend, recording 71 assists in six sets for a 11.83 average. She also added 11 digs for good measure.

The Tigers got out quickly, winning the first set 25-10. A Jessica Williams service error made the score 3-2 Clemson, but that was the closest the Wolfpack would get the rest of the way, as the Tigers ripped off six straight points, and eight of the next nine to take a 9-2 lead. Two blocks and two kills by Rand gave Clemson the separation it needed to cruise to the set victory. NC State had just six kills against 10 errors for a -.111 mark.

For the second straight set, Clemson took a 15-5 lead behind several NC State errors. Proctor and Patzin had four kills apiece and Sandra Adeleye had three of her seven kills in the set. NC state rallied to bring the score to 19-15, but back-to-back kills from Rand and Proctor ended the rally and sent to Tigers on to a 25-19 set win.

The third set started much tighter, with the score knotted at eight early on. However, Clemson found a 15-6 run, fueled by of Murphy’s 13 assists in the set. She was able to find six different attackers for kills, including Proctor, who had five in the set.

Clemson will now head on the road for their next action, taking on Miami and nationally-ranked Florida State on Friday and Sunday, respectively.