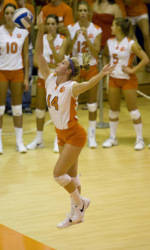 Senior Brittany Fennell had eight kills and no errors, for a career-best .800 mark.

Defensively, Clemson held Loyola (1-4) to a .086 hitting percentage and had 12 total blocks. Didem Ege ran her streak of consecutive double-digit digs matches to 49 with 19 in only three sets against the Ramblers. Alexa Rand had five total blocks, while Fennell added five of her own.

The second set started much tighter, as Loyola took an 11-10 lead early in the set. However, a 9-0 Clemson run put the set out of reach. Ozdemir had 2 kills and two blocks during the run, which propelled the Tigers to a 25-17 set win and a 2-0 match lead.

In the third set, Loyola again played solid volleyball, trading points for much of the match. With Clemson ahead 11-9, Loyola went on a 6-1 run to take a 15-12 lead. However, Clemson ramped up the offense, powering to a 13-5 match-deciding run, which brought the program win total to 692.

The Tigers play two matches on Saturday. Clemson and Western Illinois play one another for the first time in program history at 10:00 am central, and the Tigers take on DePaul at 7:30 central. Live stats will be available for both matches.