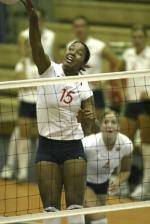 Clemson claimed the first game 35-33, behind seven kills from rookie Liz Beckham. The Tigers jumped out to a 5-1 lead before the Paladins battled back to tie the game at seven each. The teams would trade lead changes nine times in the first game, and Furman held three game points before Clemson tallied two kills and a block solo to knot the score once more at 29-29. The teams traded points until a Leslie Finn kill and Lori Ashton ace sealed the game for Clemson.

Game two proved to be as exciting as game one, with Clemson again edging Furman, 33-31. Once again, Beckham led Clemson, posting 11 kills with eight digs and two blocks (one solo). The second stanza was tighter from the start, with 21 scoring ties and another nine lead changes. The largest advantage either team held was three points, when Clemson put together a four-point run early in the game. The score remained tied from 27 all through 31 all. Block assists by Ashton, Beckham and Stephanie Haskell along with a kill by Beckham capped off the second game.

The Tigers took an early lead in the final game, capturing the match with a 30-20 game three win. Ryane Beasley paced Clemson with eight kills and a .636 hitting percentage. Six consecutive kills, including two each by Beasley, Beckham and Ashton, gave Clemson a seven-point lead the Tigers never relinquished.

With tonight’s win, the Tigers improve to 1-3 on the season, while the Paladins fall to 0-4. Clemson returns to action on Friday at 1:00 PM, as the Tigers face College of Charleston in the first round of the 2003 Big Orange Bash.