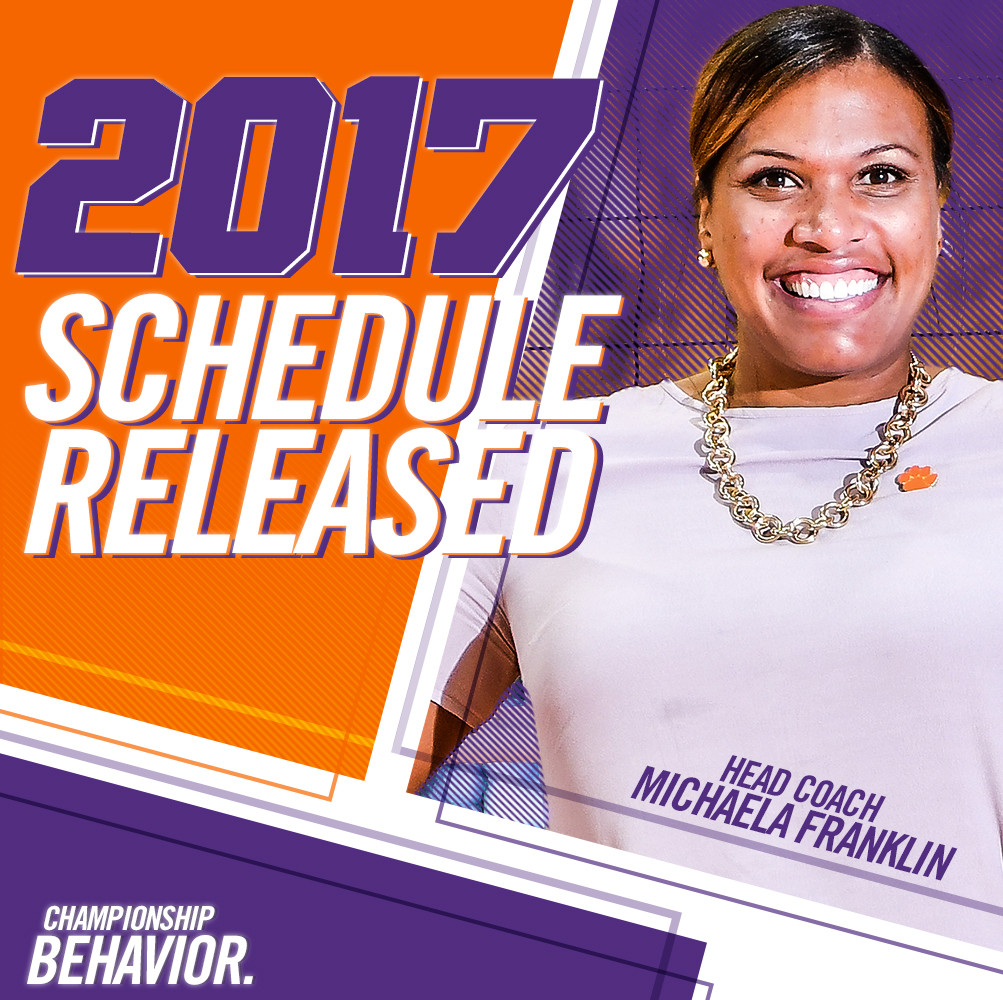 CLEMSON, S.C. – The Clemson volleyball program’s 2017 schedule features 17 matches at home in Jervey Gym, 10 in conference play and seven out of conference, which include two home tournaments. Head Coach Michaela Franklin, who will coach her first match for the Tigers on Aug. 25 at Jervey Gym, made the announcement on Wednesday.

“We are excited to release our 2017 schedule,” said Franklin. “I’m looking forward to playing majority of our season at home in Jervey Gym, and also to the challenge we will face when playing on the road.”

The Tigers host two tournaments, beginning with the annual Big Orange Bash on Aug. 25-26, when Bethune-Cookman, Jacksonville and Lamar come to town. On Sept. 15-16, Clemson hosts Texas Tech, Georgia Southern and in-state rival South Carolina in Jervey Gym. The match between the Tigers and Gamecocks is set for Sept. 16 at 7 p.m. Clemson travels to New Haven, Conn. and Auburn, Ala. for tournaments on Sept. 1-2 and Sept. 9, respectively, during the non-conference season.

Franklin and the Tigers face their first Atlantic Coast Conference opponent, Georgia Tech, on Sept. 22 in Jervey Gym. Clemson at has 2016 NCAA Sweet 16 team North Carolina and NC State at home on Sept. 29 and Oct. 1, respectively. The October schedule features four-straight home matches between Oct. 20 and Oct. 29, against Boston College, Syracuse, Wake Forest and Duke. The Tigers conclude the season with three-consecutive matches in Jervey Gym, as they host Pittsburgh on Nov. 17, Florida State on Nov. 22 and Miami on Nov. 24. The Panthers and the Seminoles both won at least one match in last season’s NCAA Tournament, with Florida State reaching the Sweet 16.

Clemson’s ACC road slate begins on Sept. 24 in Winston-Salem, N.C. and includes road streaks of four-straight matches in October and five-straight in November. From Oct. 6-15, the Tigers face Syracuse, Boston College, Louisville and Notre Dame on the road, and from Nov. 3-15, they head to Virginia, Virginia Tech, NC State, North Carolina and Georgia Tech.