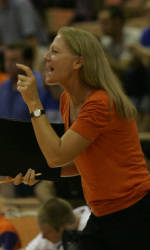 The Tigers will open with an intrasquad Orange and White scrimmage on Aug. 19 at 5:00 pm in Jervey Gym, the final exhibition before regular season play.

Collegiate volleyball schedules typically feature four tournaments at the beginning of the year before the ACC’s 20-match schedule kicks in. This year, Clemson will open the season with the 21st annual Big Orange Bash, which takes place August 26-27 in Jervey Gym, and features Clemson, Loyola (MD), Tennessee State, and South Carolina State.

The Tigers then gear up for a tough trip to Florida, as they take on the Gators, who were the top overall seed in the 2010 NCAA Tournament, and take on Florida Atlantic and Jacksonville in that round-robin from Sept. 2-3. The Tigers will then travel to Orlando on Sept. 4 to take on 2010 Final Four participant Southern Cal.

“We definitely have a challenging schedule and hopefully it will be a good year for a tough schedule with everyone returning,” said Jolene Jordan Hoover, who has guided Clemson to eight NCAA Tournaments. “It is important for us to try to get our RPI as high as possible in order to make the NCAA tournament, and it is a pretty exciting opportunity to play both Florida and Southern California. They are both very well-respected programs with rich volleyball history and those matches will make us a better team.”

The Tigers then head to Charleston, SC for the unofficial state tournament, featuring the College of Charleston, Winthrop, and South Carolina, from Sept. 9-10.

Clemson then holds the Clemson Classic from Sept. 14-16. This year, the group includes Furman and ACC foe Georgia Tech.

Clemson gets in to full conference play on Sept. 23 at Wake Forest and takes on Sweet 16 participant Duke on the 24th in Durham. Clemson plays four at home before heading on the road for eight of the next ten, including trips to NCAA Participants Miami, Florida State, Virginia Tech, and North Carolina.

“The conference has so much parity that every match is a battle,” said Hoover. “The stretch of eight out of ten on the road for us is a tough draw, we’ll just have to keep our bags packed and keep moving. We must take it one match at a time, be in every match, and give ourselves opportunities- I am proud of how competitive we are as a team.”

The ACC sent five teams to the Big Dance in 2010, tied for the most all time. Four of the teams advanced in the tournament, also a record. Clemson finished sixth in a tight ACC race, snapping a streak of three straight tournament appearances.

The Tigers host Florida State and Miami on Nov. 18-19 before closing the regular season on Nov. 23 against Georgia Tech.

Clemson was 18-13 and 9-11 in league play in 2010, but returns 96.0 percent of its kills and 93.4 percent of its blocking. Clemson led the ACC and was 11th nationally in blocking, led by rising junior Alexa Rand, the ACC’s individual leader, who averaged 1.45 per set last season, good for 8th nationally, and 23 teams’ totals.

Two-time All-ACC selection Sandra Adeleye is also back for her junior season, as she ranked in the top ten in the ACC in kills per set and blocks per set. ACC All-Freshman selections Mo Simmons and Hannah Brenner also return. Simmons will play with USA Volleyball’s Junior National Championships this summer.

The Tigers also add three freshmen, all of whom are considered top-250 prospects nationally. Kamryn Sherman enrolled in January, and was a prepvolleyball.com All-American. She will compete for the A-2 Junior National Team in Croatia this summer as well. Karis Watson of Rock Hill, SC and Kristin Faust of Orlando, FL are the other incoming prepvolleyball.com honorable mention All-Americans.