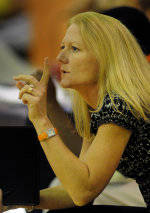 The Tigers will hold the Orange and White scrimmage on Aug. 21 at 1:00 pm to give fans a taste of the new-look team. Other highlights of the schedule include 11 matches against seven 2009 NCAA Tournament opponents. This season’s Dig Pink match will be on October 22 against Maryland.

Clemson will have a new look in 2010, as they lose three All-ACC performers in Lia Proctor, and Didem Ege. The Tigers have made three straight NCAA Tournament appearances, only the second time in school history.

The team will play host to the Big Orange Bash to open the season on the weekend of Aug. 27-28. Jacksonville, Tennessee Tech, and Albany will come to town for a round-robin tournament.

Clemson then goes to Winthrop of an all-South Carolina tournament, which features Winthrop, Clemson, College of Charleston, and South Carolina in a round-robin playoff in Rock Hill.

Clemson will then host the Clemson Classic from Sept. 17-19, which will feature ACC foe Georgia Tech, Georgia State, and NCAA Participant Florida A&M. This is serve as both the opening of the conference season and the conclusion of non-conference play.

The full ACC slate gets underway on Sept. 24-25 weekend as Clemson welcomes Wake Forest and Duke. After only meeting once last season.

There are 20 conference matches in all, with Clemson meeting each team for a homa-and-home, except Boston College and Maryland, against whom Clemson will play only once in Clemson.

After the five straight home matches form the Clemson Classic and the opening ACC weekend, the Tigers will go on the road for four straight, to Virginia, Virginia Tech, Florida State, and Miami. The Tigers then play eight of the next ten matches at home, which includes the Dig Pink match on Oct. 22 against Maryland, and senior night on Nov. 13 against Virginia Tech. Clemson closes the 2010 regular season with three straight on the road at UNC and NC State, before going to Georgia Tech for a Friday match after Thanksgiving.

Three matches times have been set but are subject to change due to football games. Included are the Oct. 16 match with UNC, the Oct. 23 match with BC, and the Nov. 6 match with Florida State.

Clemson is coming off a 2009 season in which they went 23-10 and made a third straight NCAA Tournament appearance. The ACC sent a record five teams to the big dance. Clemson’s key returners are Cansu Ozdemir is the team’s lone senior, as Clemson will likely play four freshmen and four sophomores regularly.