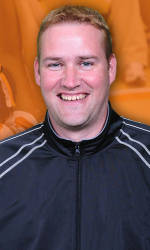 CLEMSON, SC – Clemson Volleyball head coach Jolene Jordan Hoover announced the hiring of Derek Schmitt to the staff as an assistant coach. Schmitt, a 1995 graduate of Eastern Nazarene College in Quincy, MA, comes to Clemson after serving as the Head Women’s Volleyball Coach and Assistant Director of Athletics at Southern Wesleyan University since 2005.

“I am very excited to announce that Derek Schmitt will be joining our staff at Clemson,” said Hoover. “He has handled many different areas during his time at Southern Wesleyan, in addition to coaching their volleyball team, which made him an extremely attractive candidate for this position.”

Schmitt had extensive responsibilities at Southern Wesleyan, including the coordination of all travel, maintaining academic progress, overseeing the travel budgets of 10 teams, performing sports information duties, in addition to his duties as a head volleyball coach. He has also worked with Club South Volleyball in Spartanburg, SC, since 2008, a program which turned out Clemson players two-time All-ACC selection Lia Proctor and Lisa Jedlicka.

“I am extremely excited to be joining the Clemson Volleyball program and the entire Clemson Athletics family. I am very thankful to Coach Hoover and the administration for providing me with this opportunity. Having lived in nearby Central, S.C. for the past five years, I’ve been following athletics at Clemson and specifically the volleyball program. The volleyball program has had a lot of success and it is a privilege to be a part of it going forward.”

As part of his Assistant Coach post, Schmitt will be responsible for many of the team’s day-to-day operations and administration. He will also be responsible for the coordination of travel as well as assist in on-court strategy and execution.

Schmitt lives in Central, SC and has been married to Monique Schmitt for 15 years. The two have a daughter, Annika, who just turned five years old.

The Tigers participated in the NCAA Tournament for the third consecutive season in 2009, going 23-10 on the season. Four players were named to the All-ACC team, and East-Region Freshman of the Year and All-ACC member Sandra Adeleye returns, as does ACC All-Freshman team honoree Alexa Rand for 2010. The Tigers have signed a solid, four-member class for 2010 as well.