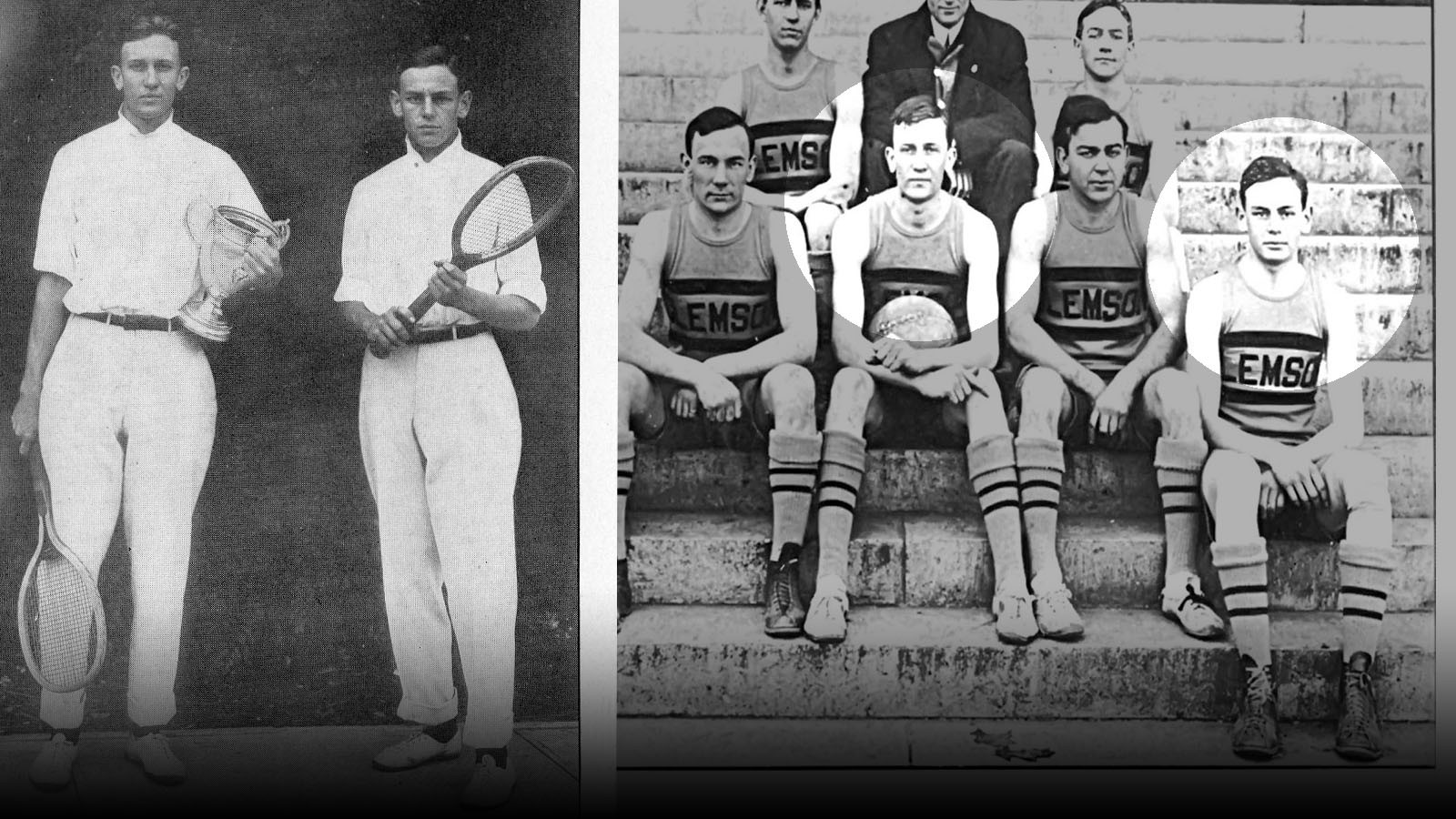 Two of Clemson’s earliest sports stars were basketball and tennis players, James and John Erwin, from Spartanburg, SC. The two brothers left their legacy in Clemson sports a little over a century ago. During this time state championships were decided among the colleges in South Carolina by having tournaments and keeping up with standings in intra-state play in the various sports offered by the schools. The Tigers were also members of the Southern Intercollegiate Athletic Association (SIAA). The SIAA was an early conference composed of ACC and SEC schools. In tennis, James won the state tennis championship in singles as he defeated Grier of Erskine on November 11, 1911 at the Spartanburg Country Club. He won the state singles championship again as he defeated Wingate Waring of the University of South Carolina in straight sets 6-0, 6-1, 6-2 on October 18, 1912, at the San Souci Club in Greenville, SC. James along with his younger bother, John defeated Oates and Chambers of North Carolina in straight sets (best three of five) 7-5, 6-4, 6-4 to win the SIAA Championship in Columbia, SC on May 7, 1913. After receiving a first round bye, the Erwin brothers defeated Goodwin and Brand of Georgia 6-4, 4-6, 6-1 in the semifinals setting up the appearance in the championship match. James won over Malcolm N. Oates of North Carolina in straight sets 6-4, 7-5, 6-2 to capture the SIAA Singles title also on May 7, 1913, in Columbia, SC. On the basketball court, James played in the 1911-12 and 1912-13 seasons. In the first games in Clemson history on February 9, 1912, the Tigers defeated Furman 46-12 and the Butler Guards 78-6 in Greenville. In the Furman game, he scored 22 points and in the Butler Guards game he scored 58 points, still a Clemson single-game record. The next day against Wofford in Spartanburg, he scored 18 points in the Tigers’ 34-23 win. Erwin scored 98 points in three games. James graduated from Clemson in textiles in 1913. He was a charter member of the Spartanburg Country Club. He was married to Jean Shepherd Erwin and they had a daughter, Jean. Erwin enjoyed much success in amateur tennis, winning state amateur championships in 1913 and 1916, and 1919 and doubles in 1912, 1913, and 1915. He also played on the champion mixed doubles teamsand won the Vanderbilt Cup at Asheville in 1915 for singles.  He won several other amateur titles around the state and locally in various cities. He had little if any coaching in tennis as he grew up. He also became an avid golfer as he grew older. James died on February 6, 1978, in Spartanburg, SC. John graduated from Clemson in 1914, the same year that Frank Johnstone Jervey, (The man that the Jervey Athletic Center is named) graduated. He majored in textiles and put together a very impressive athletic resume. He was on the Clemson tennis team in 1912, 1913 and 1914. He served as the president of the State Intercollegiate Tennis Association his senior year in 1914. This position was in charge of running the annual state college tennis tournament that was held that composed of the various state teams. He was also on the first basketball squad that Clemson fielded and was on the Tiger cager squad in 1912, 1913, and 1914 playing the position of forward. He holds the distinction of being the only player-coach in Clemson basketball history as he held that capacity in 1914. The 1913 Taps called him “a fine point getter and very aggressive in every play.” Both brothers ran a grocery wholesaler in Spartanburg, SC. John was a veteran of World War I where he served as a Navy Ensign. He had a son who he named after his brother, James Overton. John died on Friday, March 3, 1972, in Spartanburg, SC. John and James Erwin were not only early stars in basketball and tennis but they also were pioneers that helped established these sports at Clemson and gave them a solid footing in their infancy.