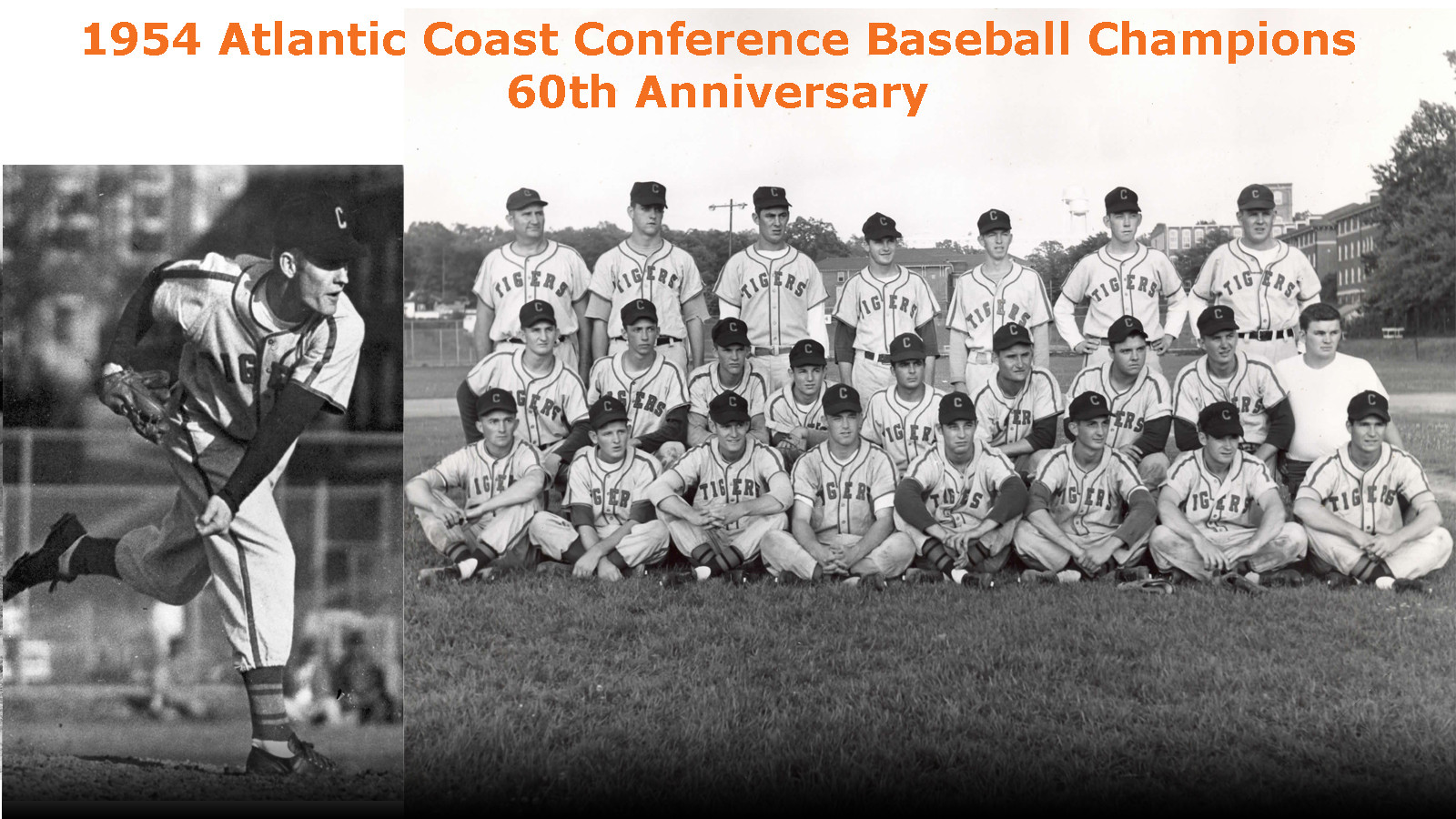 It was 60 years ago when Clemson won its first Atlantic Coast Conference Championship in any sport. The ACC was in its first year of operation and the spring sports were winding down when the Tigers claimed the ACC Baseball Title. The Tigers also advanced to the NCAA Tournament that season and finished with a 14-10 record overall and 8-4 mark in the ACC.     Center fielder Doug Kingsmore led the Tigers in several categories including 10 home runs and 27 RBI in 1954. He also led the team in hits and runs scored, and his batting average of .371 was best on the championship squad.  Billy O’Dell, a southpaw pitcher from Newberry, SC was also responsible for Clemson’s championship season as he won eight games in 1954 while striking out 111 batters. He won 19 games in three years when there were only a total of 63 games played in those three seasons.   Bobby Morris, who caught more O’Dell pitches than anyone else because he was his battery mate in high school, American Legion, service, college, and textile ball, recalls that O’Dell’s “bread and butter” pitch was his fastball.  “He had a good curve ball,” Morris remembers. “His changeup wasn’t all that great, but his fastball would come in and rise, and batters would swing under the ball. He threw a good hard ball. He was hard to catch.” Morris was behind the plate on May 8, 1953 when O’Dell had his only collegiate no-hitter against arch-rival South Carolina. He only struck out nine batters in this game and allowed only four base runners, three by walks and one on his own error.  Morris threw out three runners attempting to steal and one runner was left stranded.   Only two balls were hit to the outfield in that game.  Ironically, this was the same day that the Atlantic Coast Conference was formed.  O’Dell had a one-hitter against The Citadel just before no-hitting South Carolina and followed that gem with a two-hitter versus Furman. He had at least 15 games in which he struck out 10 or more batters, but his best night came in his freshman season (1952). The Tigers squared off against South Carolina in Orangeburg in a night game on April 4, 1952. O’Dell started out by fanning the first five Gamecocks he faced. He also struck out the last quintet as well as 11 in between for a total of 21 strikeouts. He struck out the side in the first, third, seventh, and ninth innings.  It was one of three games in his career where he allowed only four hits.    “From the standpoint of athletic ability, I always classified him like a cat out there on the mound,” said first baseman Dick Swetenburg, who played with O’Dell from 1953-54. “He could really move, and he was very versatile. He was a great fielding pitcher. “Nobody bunted on Billy and got on base. He had a great move to first and not many people stole bases on him.  His battery mate from Newberry, Bobby Morris, complimented that,” said Swetenburg. After three seasons at Clemson, O’Dell signed with the Baltimore Orioles and also played with Milwaukee, San Francisco, Atlanta, and Pittsburgh in his Major League career. He played in the big leagues for 13 years, registering 105 victories. One of Billy’s major league highlights came in 1958, four years out of Clemson, when the major league all-star game was in his own ballpark, the only one ever played in Baltimore’s Memorial Stadium. O’Dell pitched three perfect innings and was named the game’s MVP that night. The former Tiger All-American said Ted Williams was the toughest player he ever faced. “You talk about Ted Williams and then you talk about everybody else,” O’Dell said.   “He’s the best hitter I’ve ever seen. He just hit the ball hard all the time. I’ve seen some great ones, but Williams was just a cut above everybody.”  In his career at Clemson, O’Dell averaged 12.29 strikeouts per nine innings, and had 1.51 career ERA (0.79 his junior season). He recorded 19 complete games and 300 strikeouts.   “When he was on, he was tough,” Swetenburg said. In Clemson’s 1954 title season there were honors galore for the team. Roy Coker, Wyman Morris, Kingsmore, and Billy O’Dell were all named first-team All-ACC.   Bobby Morris was named to the second team.   Clemson Head Coach Bob Smith was named ACC Coach of the Year and O’Dell was also named an All-American.    Winning the school’s first ACC Title was very special for the 1954 Tiger baseball team.  It was a true omen for great things to come as Clemson would win two more ACC Championships and play in the College World Series twice before the decade of the 1950s would end.