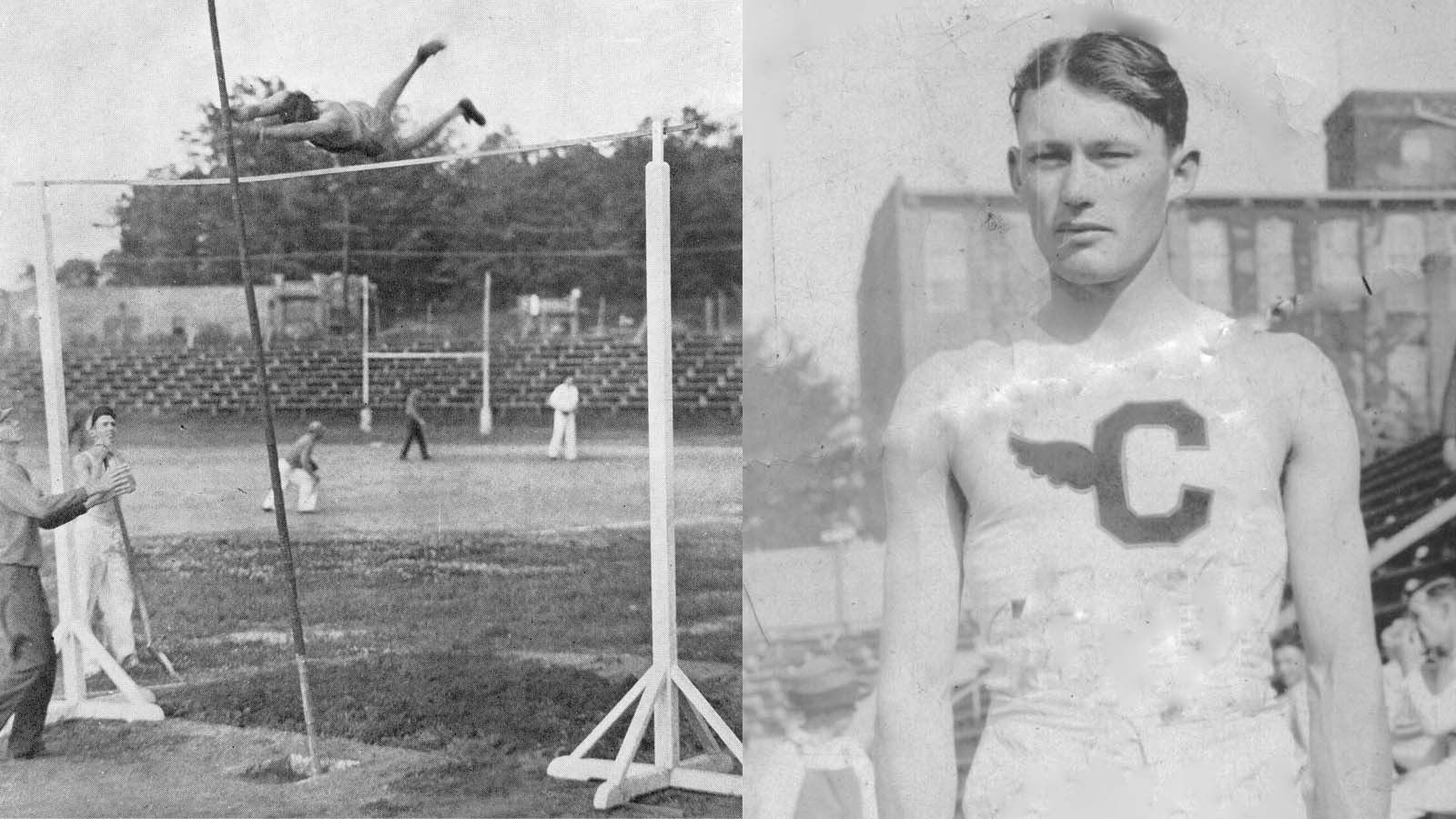 Perhaps one of the most well-known Clemson track and field athletes in the early 1900s was Ross O’Dell.  O’Dell gained his fame as one of the best pole vaulters in the nation, having gone to the 1928 Olympic Trials and participating in the Penn Relays in Philadelphia, PA.  O’Dell grew up in Liberty, SC, and set various records at that time at Liberty High School. After graduation, he went to Clemson, where his father had graduated (T. Ross O’Dell).  Ross made a name for himself at Clemson by winning championships at the state and the Southern Conference Track and Field meets. During his sophomore year (1926) at Clemson, he won the pole vault and high jump competitions twice in three dual meets. He also finished in the top three in the high hurdles, broad jump, and shot put at each meet. At the Georgia Tech relays, he set a record in the pole vault at 12 feet and four inches and placed second in the high jump.  At the state meet, he set a record in both the pole vault and the broad jump.   He won the Southern Conference meet in the pole vault and set a new conference record as a sophomore. At the NCAA meet on June 12, 1926, in Chicago, IL, he finished second with a vault of 13 feet. During the 1927 season as a junior, O’Dell won the pole vault in six competitions during the regular season. He was the high scorer in points for Clemson in all of the dual meets that season. In the state meet, he again won the pole vault and set a new record. He tied for first in the high jump and finished second in the broad jump.  At the Southern Conference meet, he set a new pole vault record and finished fourth in the broad jump. At the NCAA meet on June 11, 1927, in Chicago, IL, he finished tied for second in the pole vault. In 1928, during his senior year, he was Clemson’s leading point man in all of the dual meets and won the pole vault at all six events. At the state meet, he set records in the high jump and the pole vault. He jumped so high in the pole vault that sideline benches from the football field had to be placed under the standards so the bar could be raised. He also won the shot put competition.   At the Southern Conference meet, he broke the conference record in the pole vault for the third consecutive year, with a mark of 13’3”.  This record would stand until the 1958 track season, 30 years later, when his son Billy was a senior football player at Clemson.  At the 1928 Penn Relays, he finished second in the pole vault.   At the 1928 NCAA meet, he tied for fourth, with a vault of 12’6” At the Southeast Olympic Trials in Atlanta, GA on June 3, 1928, he finished first in the pole vault. In the Olympic Trial Finals at Harvard Stadium in Cambridge, MA, he was a sixth-place finisher.  After the Olympic Trial Finals, O’Dell was very optimistic.  “They started the bar at 11’6”,” O’Dell said.  “The first man dropped out at this height, and then several were eliminated at 12’6”.  I was the first man over at 13 feet.  I was feeling good and thought I had a chance, but others cleared 13 feet as well.  They raised the bar to 13’6” and everyone knocked the bar over on their first two tries.  I have never before come so close to clearing a height and not make it.  At each attempt at 13’6”, I got my entire body over, but the other fellows told me I was turning my left shoulder into the bar on my release from the pole.  It was a great experience, and I did my best.  I hope to clear 14 feet one day.” According to today’s standards, O’Dell would be a three-time All-America athlete.  O’Dell is one of three Clemson Track and Field athletes in history to finish in the top four at the NCAA Outdoor meet.  Of these three athletes, he is the only one to have two second-place finishes. Ross graduated from Clemson in 1928 with a degree in agriculture.  He served as county agent in Elljay, Ga and Newman, Ga.  He later was a teacher at Elljay High School and also coached track there.   His son Billy O’Dell, who played football at Clemson, was quick to describe how his father loved Clemson:  “Dad really loved Clemson and going to school there.  When it came my time to choose schools, I liked Clemson and I also was interested in Auburn.  Both schools were interested in me in playing football.  Dad had a talk with me and he said, ‘Auburn is a nice school, but you’re going to Clemson.’ I’m glad he did, as I played football and enjoyed my days at Clemson too.”