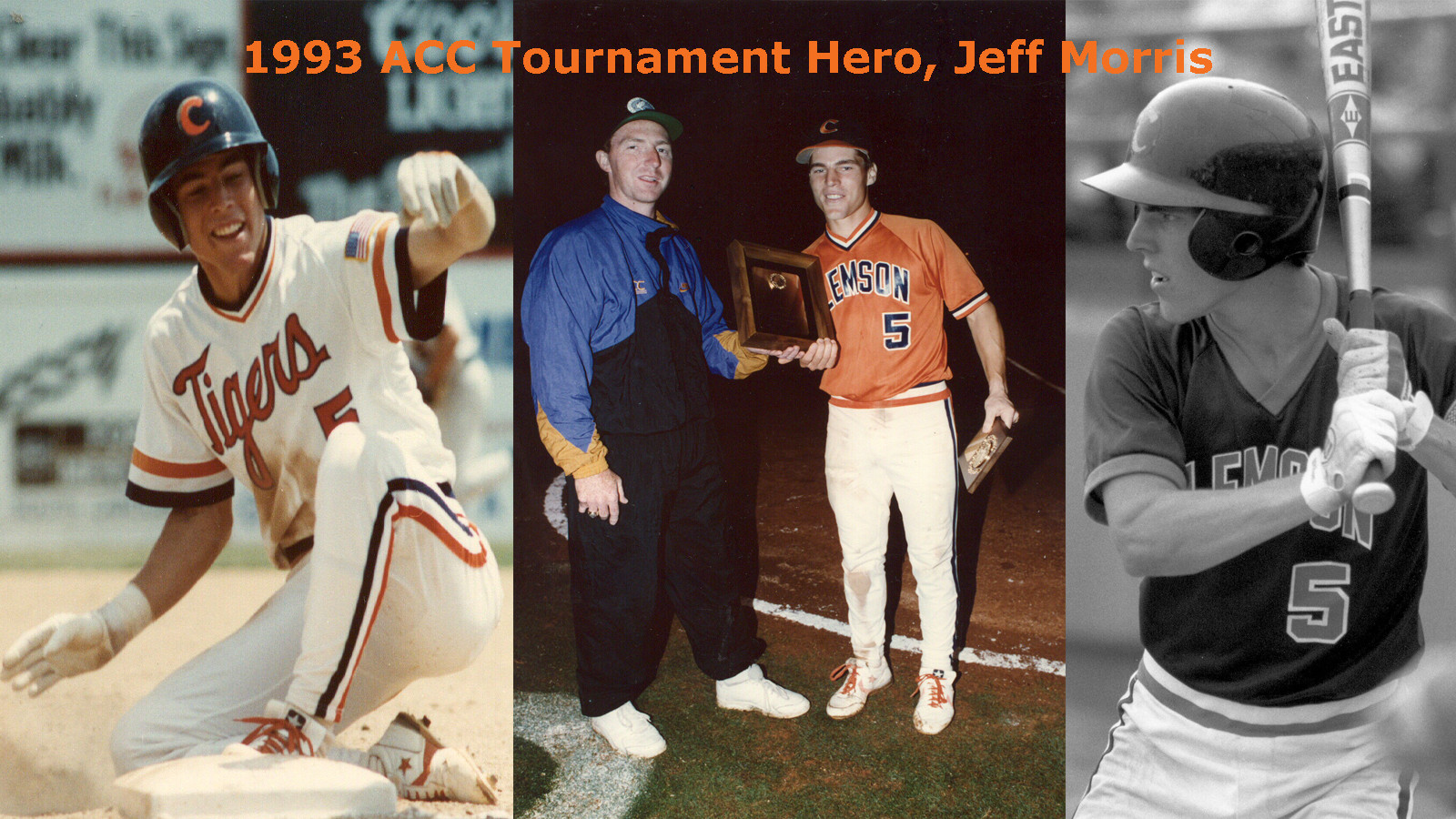 A walk-on in the fall of 1988, Jeff Morris came to Clemson with the dream of playing for Head Coach Bill Wilhelm. It’s the only reason he came.  The 5-foot-8 skinny freshman from Pittsburgh, PA knew it would be a hard climb to make the Clemson baseball team, but he was willing to do anything he could to make his dream come true. Morris became a Wilhelm fan after he attended Wilhelm’s baseball camp while in high school. He loved the instruction he received from Coach Wilhelm and the other coaches there at camp, plus he fell in love with Clemson. “What impressed me so much when I came to Clemson’s baseball camp was how involved Coach Wilhelm was,” Morris said. “Coach Wilhelm was actively involved in the instruction. He spent some time with me and I remember he made one comment to me that left an impression.  He told me, ‘You have a good little stick there.’ That kind of told me I wanted to play for this guy.” When Morris finally got to Clemson as a freshman, he discovered there were 34 kids just like him, trying to do the same thing – make the Clemson baseball team.  He was always the first to come to practice and the last one to leave. One by one, he noticed the other walk-ons getting cut. Wilhelm would call them into the office and would tell them straight up what the deal was.   “Coach was always a straight shooter. He told it like it was. He was very honest with you,” Morris recalls. “I was struggling and I was one of the bottom-of-the-half guys, but for some reason he kept me around. I did not tell him this until later, but I broke my thumb before I came down so I was a little bit hindered and was just getting back in the swing of things.” Wilhelm stuck by Morris’ side, even though then assistant coaches Dave Littlefield and Joel Lepel were asking Wilhelm why he had not cut Morris. The reason Wilhelm was committed to Morris was the conversation the two had one day after practice. After missing practice one day due to classes, Morris recognized all the freshmen and the few walk-ons that were left over; other than himself, they all had brand new white Converses with orange spikes. Wondering if this was a sign he had been cut, Morris waited until practice and approached Wilhelm about where his shoes were because his cleats were old and worn out.    “I was thinking he didn’t have the heart to cut me so he was just waiting to cut me,” Morris said. “I sat down with him, and I asked, ‘Coach, do you think I can get a pair of those shoes?’ He looked at me and said, ‘No son. Jeff that’s not necessary.’ “So he looked at me and said, ‘Why did you come to school here?’ And I said, ‘To play baseball for you.’ But he told me, ‘You can’t play baseball for Clemson. You know you can’t.’ So I told him I can. I told him I was a late bloomer. That I was going to get bigger and stronger and drink my milk and work out. ‘The cleats would really help me because I’m not getting out of the box and it is causing me to slip in the outfield. My thumb is just now getting better and I’m just now starting to swing the bat. “He said, ‘Thumb! What did you do to your thumb? What’s wrong?’ So I told him what had happened and he said he would get me a pair of cleats the next day and then he would give me a couple of more days to see if I could make the team.” With the new cleats and his thumb finally healed, Morris connected on seven-straight extra base hits during team scrimmages and earned his roster spot in the process. After taking infield practice with Bill Spiers later that week, Wilhelm gave Morris the news he had been waiting for. “‘Jeff, I’m not going to cut you. Go see Todd in the locker room, he has a locker for you,’” Morris recalls. “It’s funny because all the lockers were taken, so I had to share with one of the freshmen. I was happy with that, but I’m sure as a scholarship freshman he wasn’t as happy about sharing his locker with a walk-on who should not have even made the team.” But, Morris proved his worth, as he had a career .313 batting average and will forever be linked to his grand slam in the 1993 ACC Championship game that gave Wilhelm his last title.  The ACC Tournament proved to be magical in 1993, as the Tigers went through the five-day tourney with a 5-1 record, including a come-from-behind 11-7 win over NC State in the championship game, thanks to Morris’ grand slam.   In the top of the eighth inning, Clemson was down 7-3.  The Tigers managed to score four runs and tied the game 7-7.   The Tigers’ rally had the bases loaded for Morris.   In a moment that would rival any of Hollywood’s happy endings, Morris hit his second career home run in the late night, a grand slam that put the Tigers ahead 11-7.  Ironically, both of his career home runs were both grand slams and came against the same N.C. State pitcher, David Allen.   For his heroics, Morris was named the Most Valuable Player of the 1993 ACC Baseball Tournament.  How he got to that point and the belief Wilhelm had in him is what makes his story so great.