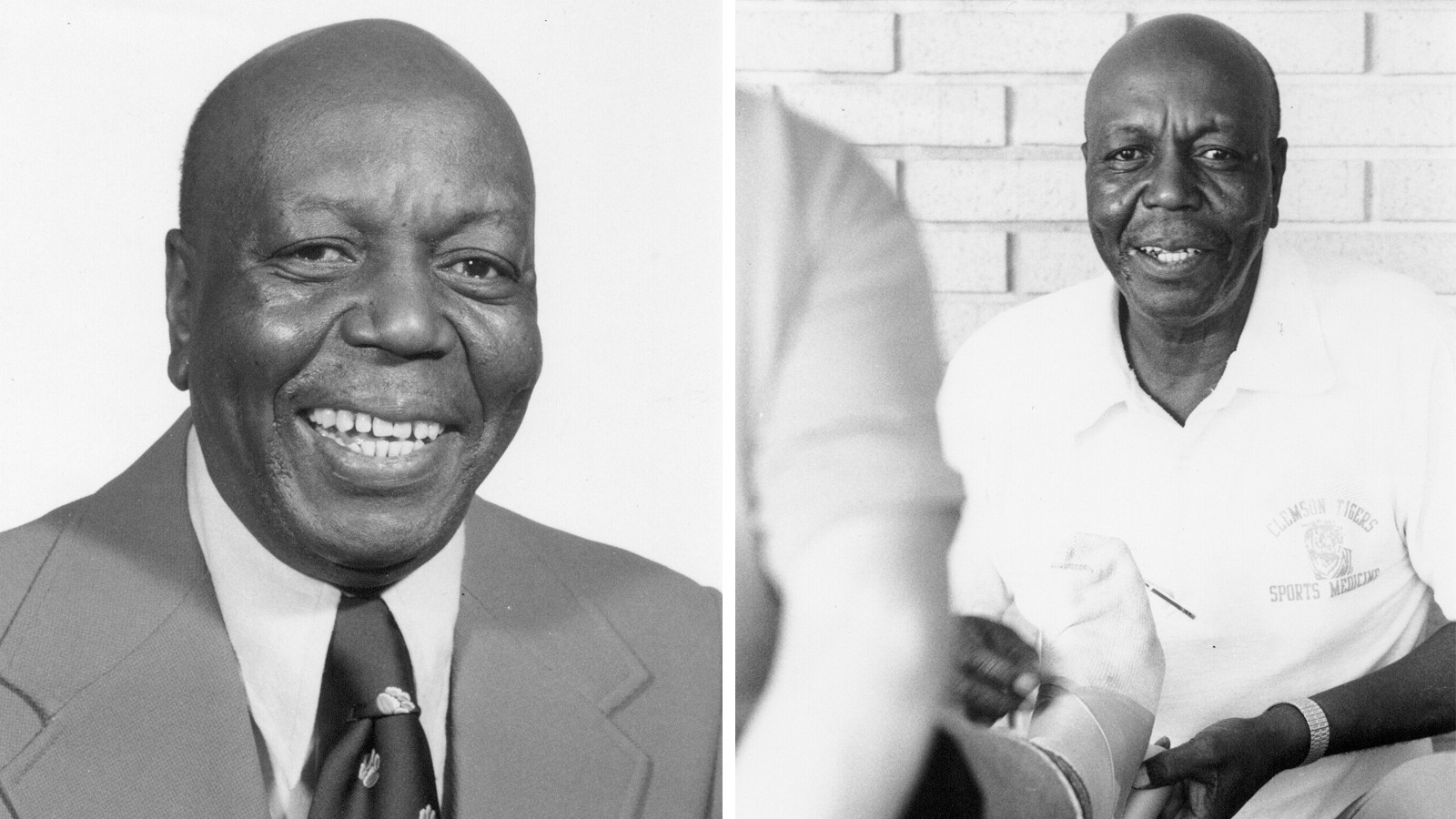 Although he never scored a touchdown or pitched a strike for Clemson, for scores of Clemson student-athletes and coaches he was just as important. This key person in the Clemson athletic department was Herman McGee. McGee was the long-tenured athletic trainer/equipment manager, counselor, confidant, and everybody’s pal who served Clemson for 46 years.     Frank Howard once said about McGee during his retirement years, “when former athletes come back to visit, I’m not the first person they look for, they want to know, where’s Herman?” Football great Joel Wells echoed this in a 1976 interview. “Anytime I go back to Clemson, I check and see if Coach Howard is around and then I check and see if Herman’s around, too.  I just wouldn’t feel that I’d been back to Clemson if I didn’t see them.” McGee meant a great deal to many student-athletes at Clemson. From massaging a bruise, taping an ankle, or talking to a student-athlete and sharing words of encouragement, McGee was there, giving his whole-hearted effort to help the Tigers attain success. Herman first started working for Clemson in an unofficial capacity when he was just a small fellow.  Jess Neely was the athletic director and head football coach, and Howard was one of his assistants. Bert Johnson, Herman’s stepfather, worked at Clemson and also served as a groundskeeper for the athletic department. Each afternoon a group of young fellows helped him work on the fields. “They’d cut grass and picked up rocks, and we paid them off in old baseballs, footballs and sweatshirts,” Howard said. “Herman was always in the crowd, and he would catch your eye because the little fellow worked so hard, a lot harder than the others. I guess I first met Herman when he was six-years old.” “When his stepfather died, I had become the athletic director and head coach and I gave Herman his job. He was 16 years old when we officially put him to work.” Except for a stint in the Army during World War II, he proudly worked for Clemson. Little did McGee know that in March 1934 when they put him on the payroll at the young age of 16 that he had found a home.  At that time the athletic department was operating out of a small cramped area in the basement of Godfrey Hall (old textile building). “We had an infra-red light and a hot plate which heated water in a big galvanized tube where we kept our hot towels,” McGee said.  “About every second or third towel you’d take out you’d get the full force of 110 volts where that tub was touching that hot plate.”   “We just taped the ones who really needed it,” said McGee.  “If they could walk, we sent them on out to the practice field.” Back in those days the practice field and the playing field were at Historic Riggs Field.     McGee remembers the mode of transportation in the late 30s and early 40s.   “It was either by bus or by train.   I remember the first flying trip I went on.   People saw us off in Anderson and wished us well.   But it wasn’t too long until we were back on the ground in Anderson with a dead engine.  While most people thought we were at our destination, we were sitting at the Calhoun Hotel (Downtown Anderson) eating and waiting for another plane to arrive.” McGee once said in an interview that he helped take 18 sections of bleachers down to Columbia for the Big Thursday game with South Carolina in Columbia each year for the Clemson fans to use. McGee was part of the growth of Clemson athletics. He recalled when the athletic department moved into the front part of Fike Field House.  A year later the first game was played in Memorial Stadium. He said those were big events for Clemson.     The native of Pendleton, SC was always out there on the field when Clemson athletes were on the field in practice or at games. But his work wasn’t always done when the games or practices were over. When student-athletes had athletic problems, school problems, or personal problems, many called Herman up in the night and had conversations with him.   “Through the years, our athletes have told Herman things, have shared problems with him that they wouldn’t be about to share with anybody else,” Howard said.    He was just about as good at helping solve problems and making people feel better mentally, as he was in curing their physical ailments. What was his secret?–a dose of sympathy and understanding. His door and heart were always open. “If anybody loved Clemson, then Herman loved them,” said former Tiger baseball coach Bill Wilhelm. He was also the trainer for Tiger baseball through out much of his career.    There were two things Herman refused to do-to name his favorite sport and his favorite athlete. “I like whatever sport is in season. I love everyone who played or coached here at Clemson,” McGee once said. He did say in an interview that the play that stands out in his mind the most was in the 1951 Orange Bowl. Against Miami, the Tigers’ Sterling Smith tackled Frank Smith of the Hurricanes for a safety giving the Tigers a 15-14 victory.  “I’ll never forget that one,” said McGee. He was inducted into the Clemson Athletic Hall of Fame in 1976. In June 1965, McGee was recognized by the National Athletic Trainers Association for “twenty-five or more years of meritorious services in the field of athletic training.” McGee died suddenly on March 9, 1980 at the age of 62.   “I never heard anyone say anything bad about Herman,” said Wilhelm. “That’s a pretty high tribute to a man.”   The impact that McGee had on Clemson and the student-athletes he helped will never be registered on a scoreboard, in a record book, or on a stat sheet, but more importantly the countless Tiger coaches and athletes he touched are winners for having known him.