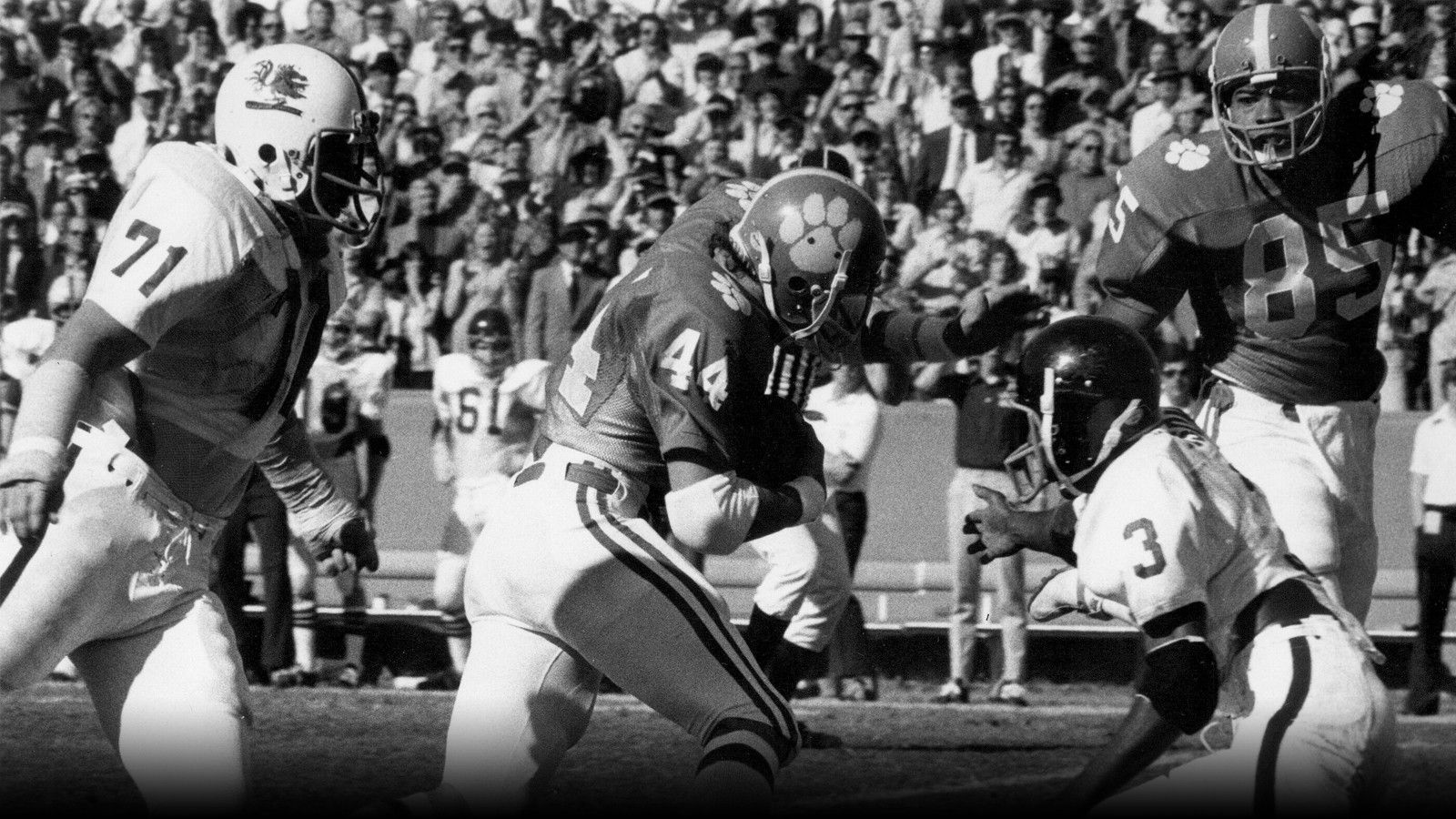 Excitement Galore, Clemson Football ’74 This fall will be the 40th anniversary of the 1974 team, which went undefeated in Death Valley. This team used two quarterbacks, Mark Fellers and Mike O’Cain and it also featured consensus All-American tight end Bennie Cunningham and a running attack led by Ken Callicutt. Going into the season, the theme was “Excitement Galore, Clemson Football ’74.” The home team did not disappoint, as the Tigers were 6-0 at home. The Tigers opened the season with two losses against two-ranked teams on the road. Clemson lost to Texas A&M 24-0 in the season opener and lost to N.C. State 31-10 in Raleigh.    The Tigers picked up momentum and won three of their next four games. On September 28, 1974, Georgia Tech made its first appearance in history at Clemson. For years, Clemson had always gone to Atlanta for the series. Clemson won the contest 21-17. Clemson held the Yellow Jackets to only 10 yards rushing and no first downs in the second half.   “We put a quarterback sweep play in on Friday when we were working out in the gym,” said Clemson Head Coach Red Parker. I noticed something on the film yesterday morning and put it in Friday afternoon. We rehearsed it, and were pretty successful with it today.” Clemson quarterback Mike O’Cain had 19 rushing attempts for 74 yards against the Yellow Jackets defense that featured All-American defensive back Randy Rhino. O’Cain would later be an assistant coach at Clemson, and Head Coach at N.C. State among other stops during his coaching career.   The next week, Clemson defeated Georgia in Death Valley 28-24, giving the Tigers victories over Georgia and Georgia Tech in the same season for the first time since 1914. In the Georgia game, O’Cain rushed for 85 yards and passed for 81 and he scored two touchdowns.   “The thing about the Georgia game was that nobody thought we were going to win but us,” said Parker. The character of our players came though.” The Tigers defeated Duke 17-13 in the third win at home for the Tigers on October 19th.  Mike McGee, the head coach at Duke and later athletic director at South Carolina was solemn after the game. “I don’t have much to say,” said McGee. “Obviously the most clear cut thing in the football game was the fact that the Duke squad made mistakes that enabled our opponent to win, particularly in the second half.”  Clemson defeated North Carolina 54-32 as The Tigers dominated every aspect of the game. Current ACC Commissioner, John Swofford was a member of this Tar Heel team. Clemson had 522 yards total offense in this game. Ken Callicutt had 170 yards rushing in this game on 19 rushes.   At the time, the 54 points was the second most ever scored against a North Carolina team by an opponent. Virginia defeated the Tar Heels 66-0 in 1912.   Parker had this to say after the game. “Everyone played well. I wouldn’t want to single any one person out. When you punt just one time in the game, it’s a sign that your offensive line is dong a great job.” The Tigers defeated Virginia 28-9, on November 16th at Death Valley.   On this day, the playing surface of Memorial Stadium was named Frank Howard Field. This day also featured the longest pass reception in Clemson history, a 97-yard touchdown pass from Mark Fellers to Craig Brantley. Brantley also caught a 55-yard pass from Fellers. In the season finale Clemson beat South Carolina 39-21 to close a perfect 6-0 season at home. Ken Callicutt had 197 yards rushing and 55 more receiving yards to key the attack. It was a Clemson record for all-purpose yards at the time. Willie Anderson had 21 tackles from his middle guard position. He was named Sports Illustrated National Player of the Week.    For the year, Callicutt led the Tigers in rushing with 809 yards for a 5.0 yards per carry mark. Bennie Cunningham led the Tigers in receiving with 391 yards and seven touchdowns.    Head Coach Red Parker was named ACC Coach-of-the-Year.  Anderson, Cunningham, Jim Ness and Ken Peeples were named All-ACC. Cunningham was a consensus All-American at tight end. He would later have a stellar NFL career with the Pittsburgh Steelers. A soft drink company produced a commemorative bottle celebrating Clemson’s undefeated season and its unforgettable accomplishments for the 1974 campaign. It was the most victories in a season for the Tigers since the 1959 season. With a 7-4 record and a perfect 6-0 record at home, this team lived up to its billing of “Excitement Galore, Clemson Football ’74.”