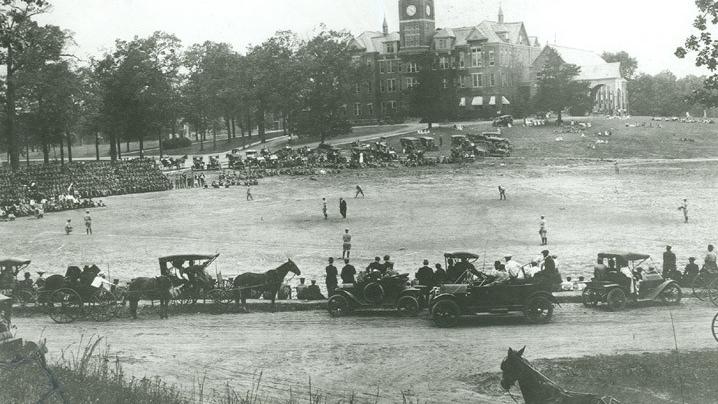 The first intercollegiate athletic contest at Clemson occurred on April 24, 1896, when Clemson played Furman in a baseball game in front of what was then called the “Main Building”, which is now Tillman Hall. It was a beautiful spring day 118 years ago with temperatures in the high 70s, that are so typical in the Clemson area.  With the playing of this baseball game, the Clemson athletic program was born. Very few details of this game exist; however, it is known that Clemson lost the game 20-13. The field in front of the “Main Building” served as home of Clemson’s early football, baseball, track and even basketball teams. It was named in honor of Randolph T. V. Bowman (August 1, 1875-April 14, 1899). He was an instructor in forge and foundry at Clemson from February 1895 to April 1899, just after the college opened in 1889.  Bowman was best known for his association with college athletics, serving as the first baseball coach and one of the first assistant football coaches. Bowman was credited with clearing parts of the area in front of the “Main Building” (Tillman Hall) and making it suitable to play baseball and other sports.  Bowman, who served as the first baseball coach, died at the young age of 23 in 1899.  The college was devastated and saddened by this loss. It was decided shortly after his death to name the area in front of Tillman Hall, Bowman Field in 1899 in his honor.  In a resolution, signed by Walter Merritt Riggs, Shack Shealy and J.F. Sullivan dated April 20, 1899, representing the football Association of Clemson College, it petitioned the President of Clemson College, Henry Hartzog to bestow, officially upon the new drill and athletic field, the name of Bowman Field.  Apparently he agreed, and it has been known as Bowman Field ever since. Clemson’s first home football game was played on this field on October 20, 1898.  Clemson defeated Bingham 55-0 as W.C. Forsythe kicked every PAT (11).  Bowman was an assistant coach for Clemson and even helped referee the game. On May 12, 1906, in the Tigers’ first-ever home track meet, Clemson defeated Georgia 59-49 on Bowman field.   The meet came down to the last event, the Mile Run.  Bleachers were emptied as the crowd lined the circuit.  Clemson won the mile run and the contest by 10 points.  Of the 12 events contested, Clemson won eight that day. The Tigers’ Track Team won the Southern Intercollegiate Athletic Association (SIAA) Track and Field Meet on Bowman Field on May 14, 1910.  Clemson’s Norman Byrd was the star in this meet as he won the 100-yard dash, the 440-yard dash, and the running broad jump. On March 9, 1912, Clemson defeated Wofford 56-13 in the Tigers’ first-ever home basketball game.  James Erwin scored 30 points in this match.  It is thought that this game too was played on Bowman Field. This field is where the legendary John Heisman coached the Tigers’ football and baseball teams in 1900-1903.  Doc Ezell also pitched Clemson’s first no hitter in a 5-0 victory over Erskine on Bowman Field on April 15, 1913. It was also home to four Clemson SIAA Championship football teams, 1900, 1902, 1903 and 1906.  The SIAA comprised of many SEC and ACC teams and at one point even Texas and Texas A&M were members. It is hard to imagine the countless number of people who have used and visited Bowman Field over the years, whether it was for intercollegiate athletic competition, military drills, relaxing under the brilliant South Carolina sunshine, homecoming activities, or playing intramural sports. However one thing is for certain, it has been an area that has and will continue to be an iconic place that has served and will continue to serve Clemson University for generations to come.