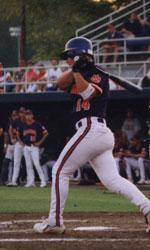 The top-ranked Clemson baseball team scored 12 runs in the fifth inning and went on to defeat Coastal Carolina 19-1 Tuesday night at Doug Kingsmore Stadium. Clemson won its first game since achieving the nation’s top ranking and improved to 19-1 while dropping the Chanticleers to 16-9.

Every Tiger had at least one hit and one RBI in a fifth inning that saw 12 runs off 10 hits. It was the most runs scored by Clemson since a 16-run fourth against Georgia Tech on April 23, 1999 and the most runs ever scored by a Clemson team in the fifth inning.

Steve Pyzik’s double started the fireworks in the fifth and was followed by Chad Coder’s two-bagger. David Slevin knocked in Coder with a line drive up the middle to give Clemson a 4-1 advantage. Kyle Frank reached on a bunt single and Khalil Greene was hit by a pitch to load the bases when Coastal Carolina removed starter Justin Sturge, who was perfect through the first three innings.

Reliever Steve Soja did not fare much better as the first batter he faced, Baker, hit a bases-clearing double. Jarrod Schmidt knocked in Baker, Jeff Hourigan followed with an RBI-single and Pyzik hit his second double of the inning to plate Schmidt. Pyzik scored on a throwing error by Coastal’s Brandon Powell.

Frank followed with a two-run double before Greene came up to bat again. The senior capped the scoring in the inning with an RBI-single, making him Clemson’s career leader in RBIs. He now has 219 career RBIs.

Clemson starter Matt Henrie (5-0) yielded just three hits and one unearned run while striking out four over five innings. The junior righthander has allowed just one earned run over his last 25.1 innings.

Coastal Carolina opened the scoring in the fourth inning. Powell struck out but reached on a passed ball by Clemson’s Pyzik. Singles by Justin Owens and Jeff Baker plated Powell and put runners at first and second with one out, but Henrie got out of the jam by inducing a 4-6-3 double play.

Clemson answered in the bottom of the inning and took a 2-1 lead. Micheal Johnson’s RBI single highlighted the inning as it extended his hitting streak to 17 games,

The Tigers used the big fifth inning, scored three more in the seventh and added two runs in the eighth to make the final margin 19-1. Clemson finished a game with double-digit runs for the ninth time in 2002. The two teams will square off tomorrow at 3:00 PM at Doug Kingsmore Stadium.