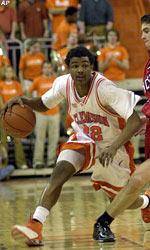 CLEMSON, S.C. – North Carolina State makes its shots and beats the No. 1 team in the country. The 13th-ranked Wolfpack miss their shots and lose to the last place team in the Atlantic Coast Conference.

Could their 60-55 loss to the Tigers on Wednesday night – only three days after knocking off Duke – be explained that simply?

“Certainly, that stands out in our mind right now,” Wolfpack coach Herb Sendek said. “You guys watched the game.”

It was hard to believe this was the same team that shot 52 percent on Sunday and moved a game behind the Blue Devils in the conference standings. Instead of a fired-up club out to grab a championship, the Wolfpack (16-6, 9-3) were off-target from the start at Littlejohn Coliseum.

North Carolina State missed its first four shots and hit only 30.2 percent (19 of 63) from the floor, including 6-for-37 on 3-pointers. The Wolfpack’s 19 points at halftime were their fewest all season. And they went a a stretch of 10:37 spanning the end of the first half and the start of the second without a field goal.

By the time Julius Hodge ended State’s drought with a driving basket, the Tigers were ahead 31-21. And they weren’t about to surrender their first win over North Carolina State in seven meetings.

It was the second victory over a ranked opponent for Clemson and first-year coach Oliver Purnell since Jan. 31, when the Tigers beat No. 12 North Carolina 81-72.

Despite the horrible shooting, North Carolina State had its chances.

Melvin hit a 3-pointer with 10.3 seconds left to cut Clemson’s lead, once 14 points, to 59-55. But Robinson made a foul shot on Clemson’s next possession to clinch it.

Earlier, Scooter Sherrill had a 3-pointer and an inside basket, and Melvin hit two foul shots to make it 50-44 with 2:17 left. The Tigers missed five straight free throws down the stretch to keep the Wolfpack in the game.

However, with a chance to cut deeper into the six-point lead, Melvin misfired on a pair of 3-pointers and Levi Watkins missed another long-distance shot.

Hodge and Marcus Melvin, North Carolina State’s top two scorers who combined for 36 points in the win over Duke, led the Wolfpack’s futility from the field.

Hodge had three of the Wolfpack’s first five buckets and Melvin the other two as they broke on top 11-7. Neither had another field goal until the second half.

North Carolina State was held to its lowest scoring half of its surprising season, trailing 25-19 at the break.

Sendek said his team gave good effort in the defeat. He saw no evidence that his players becoming overconfident in the few days since getting themselves back into the ACC chase.

“Guys were too cool to dive on the floor,” he said. “You can’t be a leader when its convenient.”

Akin Agkingbala, making his first start of the season, had 10 points and six rebounds for the Tigers.

Sendek didn’t sound ready to call an early morning practice, or angrily roll the game film to his players on the ride home.

“We were as focused as we’ve been for any game this year,” Sendek said. “We just didn’t make plays tonight that would have let us leave with a win.”