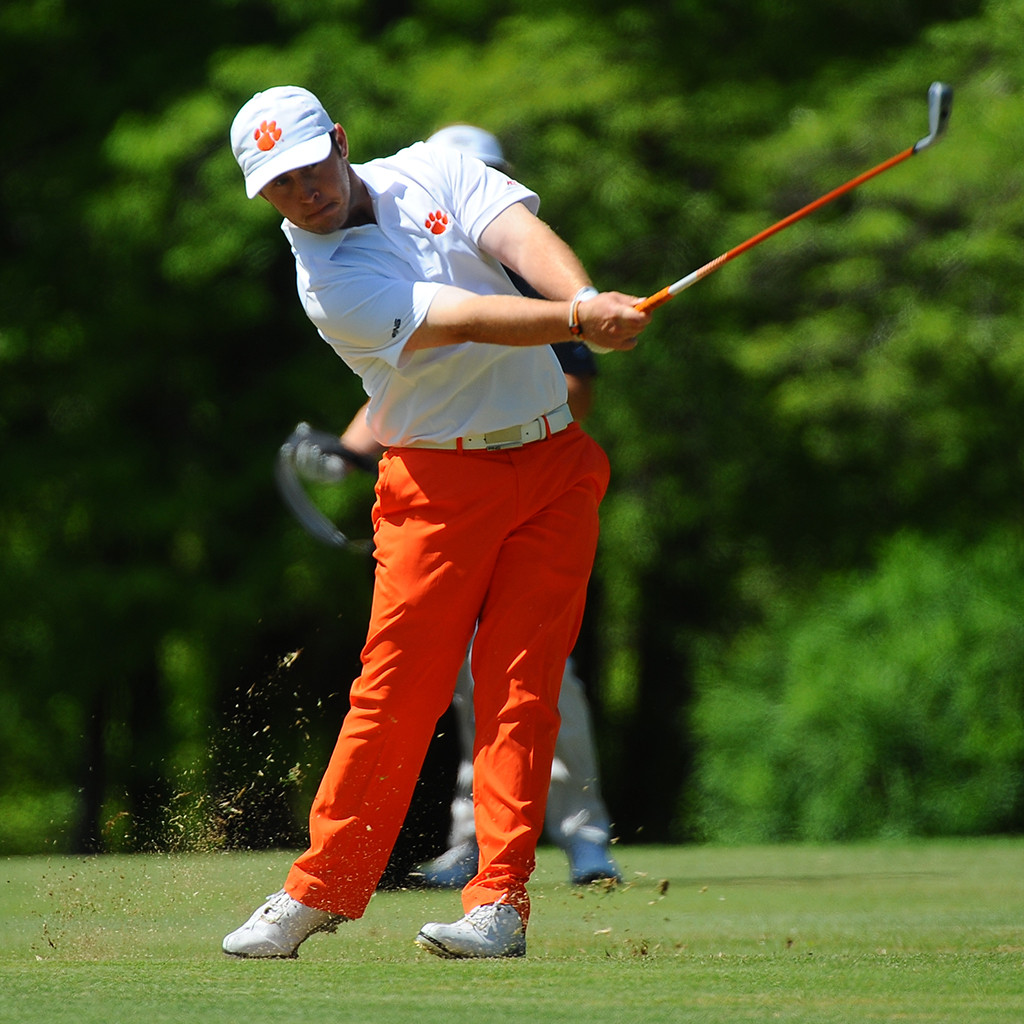 Chapel Hill, N.C.—Sophomore Austin Langdale fired a Clemson career best four-under-par 68 on Friday to lead the Clemson golf team to a 291 team score and a tie for sixth place after two rounds of the NCAA Chapel Hill Regional at the Finley Golf Club on the University of North Carolina campus.

Clemson is two shots off the five-team cutline entering the third and final round on Saturday.  The top five squads from the 13-team regional will advance to Concessional Golf Club in Bradenton, Fla May 29-June 3.   If there is a tie for the fifth and final spot there will be a playoff.

Clemson is tied for sixth place entering the final round with host school North Carolina.  Clemson stands at one-under-par 575 through 36 holes.   Stanford made a strong move on Friday with a 275 team score and jumped from seventh place to first behind the play of the nation’s number-one player Maverick McNealy, who had a 67 on Friday.

While Clemson is two shots off the cutline, the Tigers are only 10 shots out of first.  Clemson made up a 13 shot deficit in the final round to gain victory against Stanford at the 2009 U.S. Collegiate.

Stanford is first with an 11-under-par 565 team score through two rounds. Charlotte, ranked 50th in the nation entering the tournament, is second at 566, 10 under par.  Florida State, ranked No. 1 in the nation entering the regional, is third at 570.  Florida and Kennesaw State are tied for fourth at 573.  Clemson and North Carolina are tied for sixth at 575 and GRU Augusta is eighth at 578.  McNeese State is ninth at 580 and Wake Forest is 10th at 582.

J.T. Poston of Western Carolina is the individual leader at 136, eight under par.  Maverick McNealy of Stanford, the nation’s No. 1 ranked player, is second at seven under par 137.   Clemson’s Langdale is just four shots back and in fifth place.

“I am disappointed in the way we played today,” said Head Coach Larry Penley.  “We played tight.  Hopefully we got that out of our system today.

“But in the end of the day, we knew coming into this tournament whoever played well on the last day would advance to the NCAA national.  We are a couple off the cutline, but we are in position to make it.  Whether we were two ahead of the cutline like yesterday, or two off the cutline like today, we are going to have to play well on Saturday.  And there are a lot of teams that are in the same situation.”

Penley was please with the performance of Langdale, who had six birdies and just two bogeys.

“We are still in this tournament because of the round Billy Kennerly had yesterday (67) and Austin’s round today.  “He picked a good time to have his career best round.  He really did it without making a lot of long putts.  He chipped in on one hole on the front and had some short putts.  I am proud of him.”

Penley said the key for Saturday is to play relaxed.  “I know it is difficult to do, but we have to play relaxed.  I saw that Thursday and did not see it today.  The scores for most of the teams were higher today, so perhaps the other teams felt the same.  We just have to play our best on Saturday.  Perhaps it will work to our advantage to be off the cutline a couple of strokes going into the round.  We won’t be protecting a lead (off the cutline).  We will have to go out and get it.”

Langdale shot a four under par 32 on the front line.  His round included four consecutive birdies, as he chipped in from seven yards off the green on the fifth hole, made a two-putt birdie from 20 fee on the par five sixth, made a 10 footer on seven and a six footer on the par three eighth hole.

Langdale’s best hole might have been the par four he made on the 16th..  “I hit my drive up against a tree in the left rough.  My only shot was to hit it left handed.  So, I grabbed an eighth iron, held it backwards and hit it about 70 yards up the fairway.”  He then hit a wedge to within three feet and made the putt for par.

Langdale had shot a 69 five times as a Clemson golfer, so he picked a good time for a career best.  He stands at four under par 140 for the first 36 holes, good enough for fifth place.

Billy Kennerly shot a two-over-par 74 on Friday and is in sixth place at three under par 141.   Stephen Behr also shot a 74 on Friday and stands at 146 after two rounds.  He was one under par through 14 holes on Friday then made a double bogey and bogey on consecutive holes.  Cody Proveaux and Miller Capps both had rounds of 75 on Friday.

Clemson struggled over the last four holes, as a lot of teams did.  Clemson was at eight under for the tournament and four under for the round through 14 holes on Friday.  But the Tigers played the last four holes at seven over par, including six over on holes 15 and 16, two long difficult par four holes.  Through two rounds, the average score on the 16th hole is 4.32, second most difficult hole of the tournament.

The final round will begin on Saturday morning at 7:30 am at the Finley Golf Course.  Results will be posted live on golfstat.com.