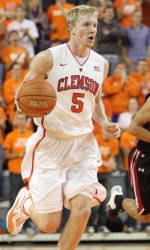 QUICK FACTS  Clemson and Arizona meet for only the second time in series history on Saturday. The Wildcats topped the Tigers in the second round of the 1989 NCAA Tournament in Boise, ID in the only prior contest.  The game has been designated the 27th annual Fiesta Bowl Classic. The event was a four-team tournament from 1985-2005, but has been a single-game matchup since 2006. Clemson is the fifth ACC team to compete in the event.  Saturday’s game will mark the first time Clemson has played at the McKale Center since the 1980 team advanced to the Elite Eight of the NCAA Tournament by beating Lamar.  The Tigers are now 4-3 on the season following a narrow 58-55 loss at home to South Carolina on Dec. 4. Clemson has lost three games by a total of seven points.  The Wildcats are 6-3 on the year and are coming off a 78-72 overtime loss at No. 12 Florida on Wednesday.  Clemson is second in the ACC in scoring defense, yielding just 55.4 points per game. That is ahead of last season’s pace through seven games, when the Tigers were giving up 61.6 per game. Clemson is 15th nationally in scoring defense according to the latest statistics released by the NCAA.  The Tigers are holding opponents to just 38.8 percent shooting from the field, sixth-best among ACC teams through the early part of the season.  Catalin Baciu, a reserve center, is coming off a career-high 10-point outing against South Carolina. He has made his last eight field goals over the past two games in 19 minutes.  Andre Young has made at least one three-pointer in 41 of his last 42 games. He needs just 11 to become the sixth player in Clemson history with 200 career three-point goals.  Tanner Smith is third in the ACC in assists per game (4.8), fourth in assist-to-turnover ratio (2.1) and ninth in rebounds per game (7.4).  Devin Booker is eighth in the ACC with 2.9 offensive rebounds per game. He is second on the Tiger squad overall with 7.1 boards per game.  Rod Hall has started each of the last four games at point guard as a freshman and has committed just six turnovers in 168 minutes. That equates to just one turnover per 28 minutes of play, an outstanding figure for a lead guard.