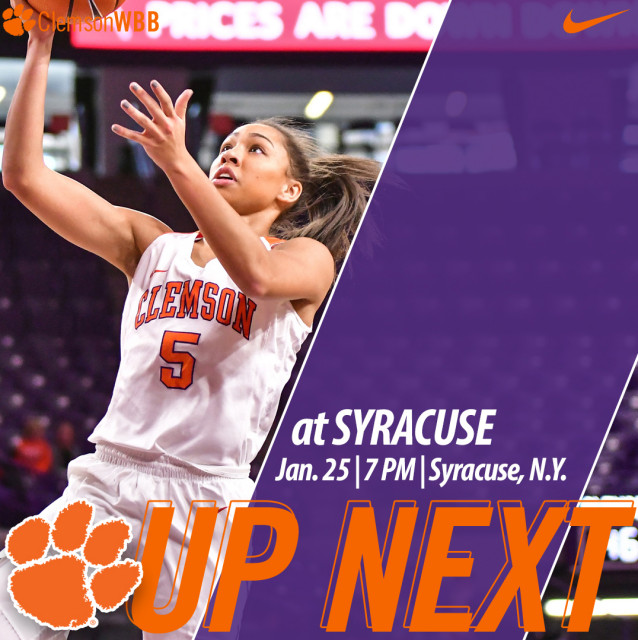 – Through 20 games and as of the games of Jan. 22, 2018, Clemson leads the ACC and ranks 28th in the nation in three-point field goal percentage defense (27.7%) and is second in the conference and 30th nationally in field goal percentage defense (36.0%). In scoring defense, the Tigers are fifth in the ACC and 36th in the nation, allowing their opponents to score an average of 57.6 points per game.

– Clemson’s defense has held two of the nation’s top-12 teams to some of their lowest scoring outputs of the season. On Nov. 16, the Tigers held No. 10/10 South Carolina to 66 points in Littlejohn Coliseum, the Gamecocks’ second-lowest point total of the season to date. On Jan. 4, also at home at Littlejohn, Clemson held No. 12/11 Florida State to 69 points, tied for the Seminoles’ second-lowest scoring output through their first 20 games.

– Thornton leads the Tigers in scoring in ACC play, averaging 11.6 points per game through the team’s first seven conference contests. She is second overall in scoring, with 9.7 points per game on the season. The 2017 ACC All-Freshman Team selection also leads the team in rebounding, with a 7.2 per game average.

– Edwards’ 55 steals rank third among ACC players and 22nd among all players nationally.

– Syracuse has a 6-0 all-time record against Clemson in women’s basketball.

– Last season, the 25th-ranked Orange defeated the Tigers 88-62 on Jan. 5, 2017 in Littlejohn Coliseum. Aliyah Collier scored 25 points and Jaia Alexander was also in double figures with 10.