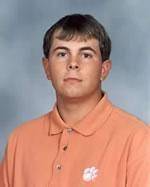 Clemson, SC – Clemson’s men’s golf team returns to the course this weekend to participate in the Chris Schenkel Invitational in Statesboro, GA. The 15-team event will be played at Forest Heights Country Club, a par 72 layout that is 6945 yards long.

Clemson head coach Zack Siefert for his first career tournament in place of junior Stephen Poole. Siefert is a native of Simpsonville, SC and Hillcrest High School where he was the state 4A champion as a senior in high school. He also won the state junior title in 2002 and was a two-time 4A all-state selection.

Joining Siefert in the Clemson lineup will be seniors Jack Ferguson and Brent Delahoussaye, and juniors Brian Duncan and Martin Catalioto. Ferguson leads the Tigers with a 72.95 stroke average for his seven tournaments. He is tied for the team lead in pars and under-par rounds with eight. He has recorded top 10 finishes at The Ridges and Isleworth Intercollegiate.

Delahoussaye has a 73.48 stroke average, second on the Clemson team, and has seven rounds at par or better. The senior from Greenville also had a top 10 finish at The Ridges. Duncan has a 73.67 average and leads the team in rounds in the 60s with four. Catalioto has a 75.13 stroke average and has had one round in the 60s each of the last two tournaments. His 68 at the Puerto Rico Classic on Feb. 27 and his 68 at the Las Vegas Intercollegiate on March 10 his career best.

The tournament will have a two-day format. The 15 teams will play 36 holes on Saturday and 18 on Sunday. Admission to the tournament is free of charge.