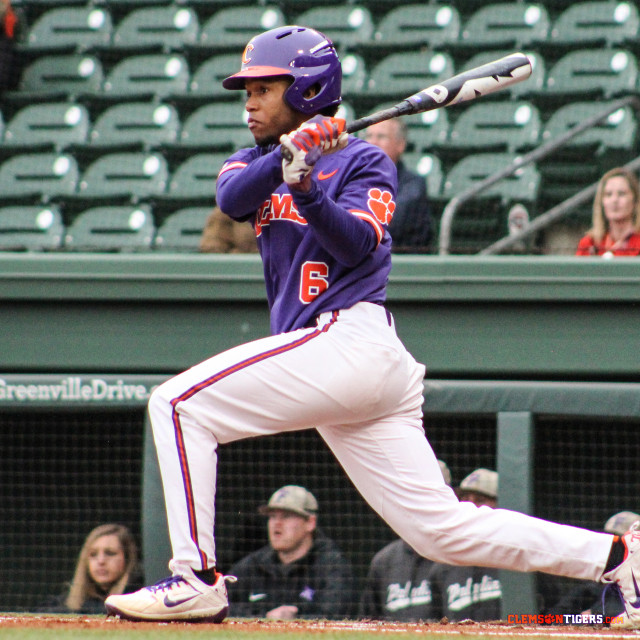 CLEMSON OVERVIEW
• Miami (Fla.) defeated Clemson twice in three games at Doug Kingsmore Stadium last weekend.
• The Tigers are averaging 5.9 runs per game and hitting .245 with a .367 on-base percentage and 24 steals.
• The pitching staff has a 3.34 ERA, .242 opponents’ batting average and 2.25 strikeout-to-walk ratio and Clemson is fielding .975.

GEORGIA OVERVIEW
• Georgia is led by fifth-year head coach Scott Stricklin.
• The Bulldogs won one of three games against Kentucky last weekend. They are hitting .282 and have a 3.57 ERA and .978 fielding percentage.
• Keegan McGovern is hitting .344 with 12 homers, while Michael Curry is batting .317 with seven homers.

PRO INFLUENCE
• Clemson has several current and former players on its roster who have MLB ties.
• Both Tiger student assistant coaches, Mark Davidson and Ben Paulsen, were former Tigers who went on to play in the majors.
• Davidson, father of Tiger shortstop Logan Davidson, played at Clemson in 1982 and played six MLB years (1986-91) with the Twins and Astros.
• Paulsen, Clemson’s first-base coach, played at Clemson from 2007-09 and played three years (2014-16) with the Rockies.
• Grayson Byrd is the son of righthander Paul Byrd, who played 14 years with the Mets, Braves, Phillies, Royals, Angels, Indians and Red Sox.
• Carson Spiers is the nephew of former Tiger infielder Bill Spiers, who played 13 MLB seasons and is currently a Tiger football staff member.
• Bo Majkowski is the son of Don Majkowski, who played 10 years as a quaterback in the NFL with the Packers, Colts and Lions.